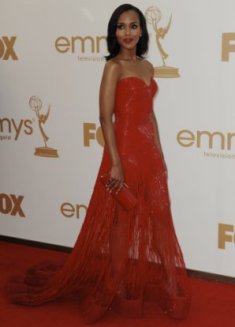 Other celebrities irked about their lack of private life should take notes from Kerry Washington. Multiple reports have suggested that the 36-year-old "Scandal" star very quietly wed San Francisco 49ers player Nnamdi Asomugha, 31, on June 24. Her parents were reportedly the witnesses present as she tied the knot with Asomugha in Hailey, Idaho. Washington and Asomugha have reportedly been dating way below the radar for about a year. The actress was previously engaged to fellow actor David Moscow, but that relationship ended in 2007. If Washington is now a married woman, she's keeping quiet about it. Reps for both the actress and her presumed new husband have declined to comment on their personal lives.