"THE GOLDEN YEARS OF PORTLAND JAZZ"
RELIABLE RECORDS
*****
Treasures buried for decades suddenly available for all to enjoy!
That is exactly what this 20 track initial release of never before released recordings of Portland jazz performances is. They came to light after the deaths of two men who separately recorded years and years of live performances by Portland musicians, as well some very big name traveling musicians who performed in the city. The CD is a companion piece to author Robert Dietsche's book, "Jumptown," covering Portland jazz from 1942-57. Most of the musicians heard here are long dead, but there are exceptions such as Mel Brown, George Lawson, Eddie Wied, Hank Swarn and Carl Smith, who are still alive.
Alto saxophonist Lawson, who at one time was compared to the great Charlie Parker, is spectacular with his treatment of "Lover Man," backed by organist Billy Larkin, guitarist Hank Swarn and drummer Mel Brown. His tone is impeccable and his ideas flow so beautifully that it makes one think of what might have been.
A major force in many areas of Portland life, pianist Bill McClendon and his quintet perform "Hackensack," a bebop exercise of the first magnitude, which features tenor Benny Freeman, trumpeter Skeeter Evans, bassist Basie Day and drummer Junior Collins. Recorded in 1953, it's hip enough to be hip today.
The Warren Bracken Trio with bassist Ed Fontaine and Ray Horn on drums does "After Hours," from a live performance at the old Turquoise Room on Southwest Barbur Boulevard.
The fabulously talented pianist Sid Porter — before owning Sidney's in downtown Portland — worked for years at the Chicken Coop on Sandy Boulevard. His trio does Duke Ellington's "Take the A Train." The veteran Eddie Wied teams with Mel Brown and bassist Leroy Vinnegar for "Eddie's Blues" — recorded at the Village in Lake Oswego in 1987.
Although a relatively small-scale release, Music Millennium, at 3158 E. Burnside Ave., and at 801 N.W. 23rd Ave., has a large stock of this album.

"SOUL OF A FREE MAN"
PATRICK LAMB
****
The soul roots of saxophonist/vocalist Patrick Lamb reach deep below the soil of his native Mississippi.
He taps into all that goes with that for this latest album. His background includes stints as the opener for BB King, the Temptations and others, and he was a frequent participant in after-hours sessions in southern juke joints.
So, casting jazz aside temporarily, Lamb puts together a large ensemble of musicians and singers for 10 solid soul tracks.  The rhythm section hears George Mitchell on Rhodes; Glen Holstrom on B-3; Eddie Martinez, Tim Ellis on guitars; Damian Jones on bass; and Anthony Jones on drums.
The horn section — Andy Fuller on trumpet and Jeff Usitalo on trombone — add a lot of funk to the mix. An instrumental included somewhere would have been a nice touch — as would a female lead vocal on at least one track. 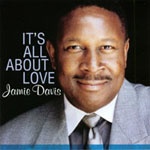 Former Count Basie band vocalist Jamie Davis croons his way right into a listener's heart with 10 high-caliber love songs.
His rich baritone voice is convincing, working in front of mostly quartets and trios. "Angel Eyes" is an exception as he sings in duo with bassist Jon Evans for a delightful result. Rodgers' and Hart's "My Romance" is delivered with perfection, with great support from pianist Mark Little and Allen Smith's muted trumpet.
Davis more than adequately fills the niche left vacant by Billy Eckstine, Joe Williams and Arthur Prysock.