Rihanna Gets Covered Up After Irish Object to Nude Tour Posters 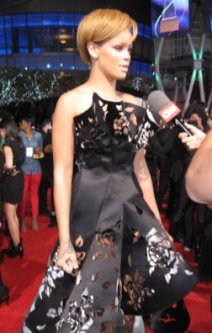 Apparently Rihanna is too sexy for residents of Dublin, Ireland.

Posters for the singer's "Diamonds" tour are being covered up ahead of her June 21 show at the Aviva Stadium. The images come from Rihanna's "Unapologetic" album cover which features her naked from the waist up, with her elbow and writing acting as a shield for certain body parts.

Twitter users have been posting images of the posters with Rihanna's body draped in dresses and plaid tops. There is some debate about whether or not folks should be taking part in a cover-up.

Of course there are some who seem to be all for the citizens taking matters into their own hands.

"North King Street, Dublin says a resounding no to Rihanna's boobs," wrote user Charlene Lydon who posted a photo of one of the cover-ups.

And though the censorship has gotten some support, especially in social media, others around town don't see what all the fuss is about. "Someone has stapled a dress to a Rihanna poster on Church St. Well done, you complete nutcase," wrote user, Paul Duane.

Rihanna's team has yet to comment on the posters, and chances are pretty good that the issue won't keep fans away from what has already been deemed a very successful tour.