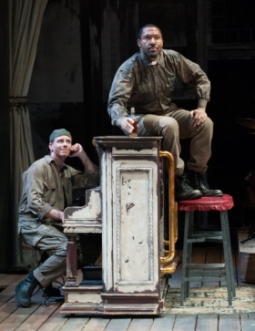 Ken Robinson is one of the newest members of the Oregon Shakespeare Festival company.  This season he's playing Freddy Eynsford-Hill in My Fair Lady and the Preacher in The Unfortunates. In this interview, reprinted with the kind permission of OSF, he talks about his work and career.

Your first season here at OSF is turning out to be an adventure for the whole family. Can you tell us about that?

Where is home when you aren't in Ashland?

We came to Ashland from Union City, New Jersey, right across the river from New York City. But as much as we loved it there, I wouldn't consider Union City home. Home is wherever we are.


How did you first become involved in theatre? Is it true that you were going down a different career path before you went to Yale School of Drama?

I first became involved in the theatre in the fourth grade of Lakeview Elementary in Oakland, CA, where I played the lead in Oliver. Years later, I attended a performing arts magnet high school in Oakland called Skyline. But I didn't believe I could make a living as an artist. So I studied economics when I went to Morehouse College in Atlanta, GA. I graduated from Morehouse and landed a position as an analyst with an investment banking boutique in New York City. I worked in investment banking for four years, and then moved back to Atlanta and did management consulting for another five years. Once back in Atlanta, I started doing (and loving) community theatre. And after a couple of shows, I was cast in three shows at the Alliance Theatre in Atlanta in one season. That was when I knew I could make a living at it -- if I studied. So I left Atlanta again and went to grad school at Yale.

How's Ashland treating you so far?

So far so good... I was born and raised on the West Coast. I grew up in Oakland, CA. But, great weather and second syllables aside, Oakland is a far cry from Ashland. 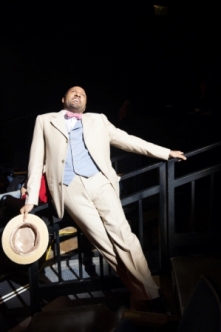 You have such a beautiful singing voice. What music do you like to listen to?

I love beautiful voices singing thoughtful lyrics with strong melodies. That love allows me to appreciate artists from many genres. I love singer/songwriters -- Eric Roberson, Dolly Parton, Bill Withers, Alanis Morrissette, Sarah McLachlan... But the voices who have influenced me the most are soul legend Donny Hathaway, R&B balladeer Will Downing and the gospel tenor of life, Daryl Coley.

With having to juggle work and family, reading books might be a luxury you don't have time for, but are there books on your nightstand calling out to you, or any you've read lately that you've liked?

Are you kidding? I must read -- each day. Even if it's just a couple of pages before bed, I'm always reading something. Right now, I'm reading Stephen Sondheim's Look, I Made a Hat. Sondheim is as compelling an author as he is a composer/lyricist. But my favorite authors are Toni Morrison, John Steinbeck and Walter Mosley. I've read all of Morrison's novels. I'm about halfway through the Steinbeck and Mosley catalogues.

Are you a good cook? If so, what are your specialties?

PHOTOS: Top, Ken Robinson as Preacher and Jesse Baldwin at the piano in the Oregon Shakespeare Festival's 2013 world premiere production of The Unfortunates. Photo by Jenny Graham.

Bottom, Ken Robinson as Freddy Eynsford-Hill in the Oregon Shakespeare Festival's 2013 production of My Fair Lady. Photo by Jenny Graham.