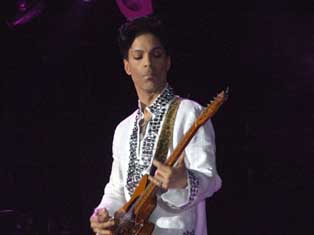 The 2013 Billboard Music Awards on May 19 honored the legendary artist Prince with the "Icon Award". He also delivered an unforgettable performance during a live ABC broadcast from the MGM Grand Garden Arena.

The "Purple Rain" singer-songwriter-musician has produced ten platinum albums and thirty Top 40 singles during his career. He has released thirteen albums since the beginning of the 21st century. He has established his own recording studio and label; writing, self-producing and playing most, or all, of the instruments on his recordings.

Prince Rogers Nelson was born June 7, 1958 in Minneapolis, Minnesota though his roots are centered in Louisiana with all four of his grandparents hailing from that state. Prince's father was a pianist and songwriter and his mother was a jazz singer. Prince was named after his father, whose stage name was Prince Rogers, and who performed with a jazz group called the Prince Rogers Trio. Prince developed an interest in music at an early age, writing his first song "Funk Machine" on his father's piano at age seven.

After recording some songs with his cousin's band seventeen-year-old Prince released his debut album, For You, in 1978. His 1979 album, Prince, went platinum due to the success of the singles "Why You Wanna Treat Me So Bad?" and "I Wanna Be Your Lover". His following albums continued his success, showcasing Prince's trademark of sexy lyrics and incorporation of funk, dance and rock. Prince pioneered the "Minneapolis sound", a hybrid mixture of funk, rock, pop, R&B and new wave that has influenced many other musicians.

The 2012 Billboard Icon recipient was Stevie Wonder. The 2012 star-studded telecast resulted in a ratings win for ABC, attracting its second-largest audience since 2003.