Public Enemy Inducted Into the Rock and Roll Hall of Fame 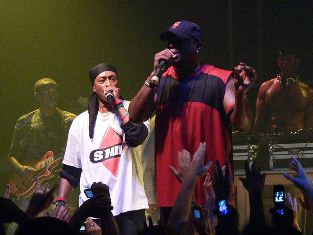 (CNN) -- Rush joined the likes of Aerosmith, The Doors and James Taylor on Thursday when the trio was -- finally -- inducted into the Rock and Roll Hall of Fame.

Having been eligible for a nomination since 1998, the honor was a long time coming for Rush and loyal fans of the Canadian band.

"This is a little overwhelming for a nice Jewish boy from Toronto," lead vocalist Geddy Lee said before thanking "the most passionate, most dedicated, incredible fan base around the globe."

Guitarist Alex Lifeson delivered an acceptance speech consisting entirely of different speeds and intonations of the words "blah blah blah," which still somehow managed to convey the story of being surprised that the band was finally being inducted and thanking the fans for all of their support.

"Once again, thank you guys for inducting Public Enemy into the Rock and Roll Hall of Fame," said Hank Shocklee, a member of the group's production team, the Bomb Squad who along with group frontman rapper Chuck D. helped create the Public Enemy sound. "Our mission was basically to inspire, to teach, to do something that we haven't done in music, or even in the rap game, was to bring about a unity, a collective effort, so that we can fight the power."

He applauded group members Chuck D, Flavor Flav, Terminator X, Professor Griff and DJ Lord for using the medium at their disposal to speak the truth and "inspire others to take on the forces of oppression that separate us and try to suffocate progressive and radical thought."

Flavor Flav, who wore a white tuxedo identical to his son's, acknowledged his trademark accessory during his lengthy acceptance speech.

This is the "last night that you see me wearing this particular clock, yes, because ... this is going into the Rock and Roll Hall of Fame," he said pointing to the clock, with a white bezel and black face, that was hanging around his neck. He quickly added: "Yes, I will put another clock on, y'all know that."

There were performances by the inductees and musical tributes like the Foo Fighters performing in full Rush regalia of white satin and wigs, Usher singing Michael Jackson's "Rock With You" and Jennifer Hudson performing some of Donna Summer's biggest hits including "Bad Girls." The show ended with all the inductees together onstage for a super-jam finale.

Though the ceremony took place in Los Angeles, Boston was on everyone's mind, including Neil Diamond's, in the wake of the Boston Marathon bombing.

"For some strange reason, Sweet Caroline has become an anthem in Boston, and I give them the song with my heart, and I hope it offers some comfort to them right now," Diamond told CNN.

Soundgarden's Chris Cornell told CNN that the tragedy in Boston scares him as a father.

The ceremony will be broadcast on May 18 on HBO.

CNN's Denise Quan and Abbey Goodman contributed to this report.