Music Release for One of a Kind Drumline 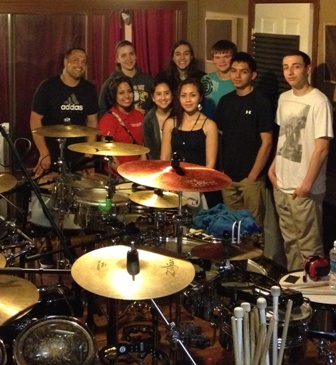 Vancouver Washington's own One of a Kind Drumline puts out their first CD on April 20, celebrating its first 10 years by throwing a release and scholarship fundraiser concert at Fort Vancouver High School Auditorium, 5700 East 18th Street Vancouver, from 8 to 9:15 p.m.

The show features vocalist Edna Vazquez with bilingual band No Passengers, as well as the Drumline. Director Eddie Esparza is also the drummer for the band, which features guitarist Edgar Baltazar and bassist Jorge Rodriguez.

For this project Esparza gathered his 12 students ranging from third to eleventh grade and collaborated with other local musicians he has performed with in the Portland/Vancouver area who agreed to lend their talents to the recording of the CD.

Up and coming rap artist Talilo worked very closely with Esparza to compose an original song in which he describes the Drumline program and how it takes the "Heart of  Lion" to keep it going and be a part of it.

The Costa Rican band Marfil worked with Esparza in addition to bassist Brent Boisvert, guitarist Franklin Leith Stewart, and keyboard/trumpet player Tyler Morgan to create three of the original songs. For several tunes the musicians never even met before recording them and will not see each other for the first time until they rehearse for the show.

The experience of collaboration – and live performance -- is why Esparza wanted to provide this opportunity to the students he advocates for in the program.

"It's about providing real life lessons doing what we want to do so the students can have hands on real life experience," Esparza says. "Reading something in a book is one thing, but we all know that doing it is something completely different, especially when it comes to the realities music industry."

Other artists on the CD who will also be performing along with the Drumline at the CD release concert will be Niso Caywood, who will be playing traditional Native flute, Joaquin Lopez, performing an original song he recently wrote with his father, and Rachel Murphy and Kyron Barrow on backing vocals.

The One of A Kind Drumline is currently in its 10th year, having performed for well over one million people at events such as the Race for the Cure, Trailblazer half-time shows, Timbers half-time shows, at the Crystal ballroom, and numerous other regional events. The Drumline filmed a documentary last year about the Trash Trail and having completed the recording of this CD they now plan to focus on gaining an appearance on the Ellen Degeneres show as the entire group feels it is the next step in order to reach their long term goals.

Admission is free but listeners can step up and support the band by purchasing tickets at: