By Helen Silvis of The Skanner News
Published: 02 April 2013

Eve Crane's historic photographs of Black Panthers from the San Francisco Bay area will be on display for the next month at Coffeehouse –Five, 740 N Killingsworth Street Portland. The photographs were taken more than 40 years ago at the height of the Black Power movement.

Crane had unprecedented access to Black Panther events and social occasions, thanks to her friendship with author and activist Eldridge Cleaver.

"I worked at Ramparts magazine and Eldridge Cleaver was also working there," Crane says. "We got to talking and he saw I was not the usual Miss Roundheels.

"He talked to me seriously and it was wonderful. So he cleared the way for me."

You can see the photos, which record many Black Panther events and include portraits of Stokely Carmichael, Bobby Seale, Angela Davis and other key figures. You can meet the photographer in person at Coffeehouse-Five each Friday in April from 1p.m. to 2 p.m.

Born Evelyn Myrtle Ford, the photographer grew up in Oregon, spending time in the city and on small farms. Her says childhood was shaped by her mother's alcoholism, so that as just a teen,  she wrote on a photograph of herself "14- Life can't get much worse."

It got better. During the 1960s she was married to TV star Les Crane and living a glamorous life in Long Island,full of Broadway musicals, POP Art openings and dinner parties with actors, artists and activists. She was also a mother of three small children.

But when her marriage broke up in 1965, Crane returned to the West Coast and to San Francisco, which soon was to be the scene of the 1967 Summer of Love. As a freelancer, she started out with photo spreads of women exercising, and soon got entry into some of the most exciting events of the time. 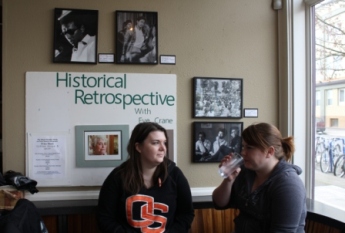 Her work was published in Time, Look, Ramparts, Life and Playboy magazines.

Later she opened Studio 10 and applied her skills to candid portraiture. Today she lives in Beaverton, where she says she loves her apartment and likes to photograph her garden.