Beyonce on New Album and a 'Destiny'-Filled Reunion 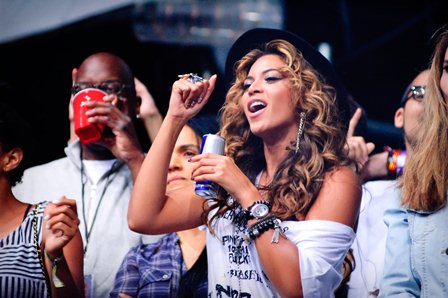 (CNN) -- As the newly minted "Hottest Woman of the 21st Century" - per GQ magazine - Beyonce is well aware of the power she wields as an influential entertainer. But that doesn't mean she completely understands it.

The 31-year-old singer said as much to GQ in its February issue, which boasts the mom of one on the cover in just skivvies and a cropped top.

"I now know that, yes, I am powerful," Beyonce said. "I'm more powerful than my mind can even digest and understand."

And she's worked hard to get to this point. Her younger sister, Solange, reiterates the legends we've all heard of Beyonce's work ethic at a young age, recalling that Beyonce would want to keep practicing a routine when the average 10-year-old would be ready for a break.

"I worked so hard during my childhood to meet this goal," Beyonce acknowledged to GQ. "By the time I was 30 years old, I could do what I want. I've reached that. I feel very fortunate to be in that position. But I've sacrificed a lot of things, and I've worked harder than probably anyone I know, at least in the music industry. So I just have to remind myself that I deserve it."

Yet there's more work on the horizon as she prepares for her Super Bowl Halftime performance on February 3, a Destiny's Child reunion and a fifth album.

Yes, you read that correctly: after lingering rumors of a reunion, Destiny's Child is actually releasing new music. Bey announced the news on her website Wednesday, writing, "I am so proud to announce the first original Destiny's Child music in eight years!"

Called "Destiny's Child -Love Songs," a statement describes it as "a new career-spanning collection of the most sensual and romantic recordings." The compilation features songs recorded between 1997 and 2004, but it'll also feature a new song called "Nucleur." Fans can pre-order now, and "Destiny's Child -- Love Songs" will arrive on January 29.

For her new solo record, Bey reveals that she's recorded about 50 songs while working with collaborators like The Dream, Justin Timberlake, Timbaland and Pharrell Williams.

Her influences are "mostly R&B" for this one, she said. "I always have my Prince and rock/soul influences. There's a bit of D'Angelo, some '60s doo-wop. And Aretha and Diana Ross."