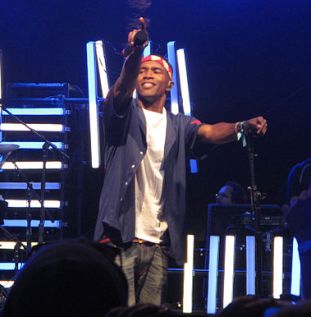 R&B favorite Frank Ocean ended 2012 with a run-in with the law.

On New Year's Eve, the singer was pulled over for speeding and ended up busted for alleged marijuana possession.

The "channel ORANGE" singer was driving along Highway 395 in Mono County, California, when the California Highway Patrol spotted his black BMW speeding at around 4:30 p.m.

The officer noted a strong odor of marijuana when approaching the car, and discovered that Ocean was carrying a small bag of pot, according to the Mono County Sheriff's Department.

The R&B star was cited for possession of marijuana, a misdemeanor, and was released on the spot. The incident has been passed on to the Mono County District Attorney's Office for further review.

Reps for Ocean tell CNN that they have no comment about the incident, but Ocean himself tweeted after the event saying only,  "hi guys, i smoke pot. ok guys, bye"

That was the first of several tweets that seemed to refer to the incident. A short time later Ocean tweeted

"hi guys, i drive a m3. that bitch fast..ok guys, bye. :),"  followed an hour later by, "big homie aldous huxley."  Aldous Huxley, the 20th century British writer who wrote the classic "Brave New World" also wrote "The Doors to Perception" which dealt with his interest and experimentation with drugs.

Ocean's next tweet, was a link to Lana Del Rey's "Ride" video.