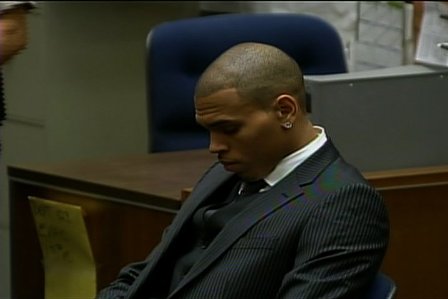 (CNN) -- Chris Brown has deleted his Twitter account after getting into a vulgar war of words with comedian and writer Jenny Johnson on Sunday.

The stomach-churning exchange of messages all began with Brown tweeting, "I look old as f***! I'm only 23," and Johnson responding, "I know! Being a worthless piece of s*** can really age a person."

The back-and-forth between Brown and Johnson, some of which can be seen on Johnson's still-public feed, continued for at least half-an-hour. Brown bit back at Johnson's initial reply with a derogatory comment referencing oral sex, to which Johnson readily corrected his spelling.

From there, Brown made a lewd comment about farting, to which Johnson replied, "Your mom must be so proud of you." She also posted a link to a 2009 MTV News story containing details of Brown's assault on his then-girlfriend Rihanna.

After another round of scatological chatter, both Johnson and Brown seemed to give in.

"Okay. I'm done," Johnson wrote, later adding, "I have zero respect for a person who seems unapologetic for the terrible crime he committed and shows no signs of changing."

Before shutting down his Twitter account, Brown told his fans, "To teambreezy... Know that I'm not upset. Just felt like entertaining the ignorance ... Further proved my point of how immature society is. #CarpeDiem. Catch me in traffic ..."

Since the Twitter spat, Johnson has reported receiving threatening messages.

"It's alarming how many death threats I'm receiving via replies," she tweeted Monday. "I encourage everyone, including Twitter to look through them. Not cool."

Brown, meanwhile, had encouraged Johnson to "Just ask Rihanna if she mad??????," which wouldn't appear to be the case. The pair, who announced their renewed friendship in October and have collaborated together on a song for Rihanna's new album, "Unapologetic," were reportedly spotted in Berlin over the Thanksgiving holiday.