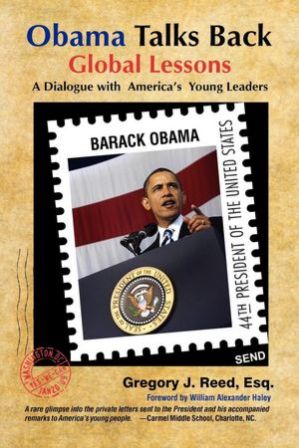 "This collection of letters [offer] a rare glimpse into the dialogue between our nation's youth and the President of the United States...They cover a wide range of human emotions, fears and concerns, and echo President Obama's message for change as these young people make their spiritual and intellectual pilgrimage into adult citizenship...

From these letters, we learn that young citizens are committed to their country. They are not quitters.

From President Obama we learn the importance of listening to one another, and of perseverance. We learn in desperate times we must have faith and know we are empowered to change the circumstances and conditions of our lives and the destiny of America for the better."

Excerpted from the Introduction (pages 2-3)

How might the President respond if your child wrote him a letter expressing his or her most urgent concerns? There's no need to speculate, since just such exchanges are the subject of Obama Talks Back, a fascinating collection of his responses to inquiries posed by precocious kids about everything from healthcare to education to racism to war to poverty to climate change.

The book was compiled by Gregory J. Reed, Esq., founder of Keeper of the Word Foundation, and includes a biographical sketch of the President, as well Barack Obama trivia, plus a list of his greatest accomplishments since taking office. Still, the meat and potatoes of this opus are all the heartfelt exchanges.

For example, when a child named Alex from Chesapeake, Va., admits that he's worried about gang violence, Obama allays his fears with, "No child should have to walk to school every morning in fear."

However, he also exhibits a concern for the rehabilitation of juvenile perpetrators, saying, "When a gangbanger shoots indiscriminately into a crowd... not only do we need to punish him for the crime, but we need to acknowledge that there's a hole in his heart," before concluding, "We must do more to address this issue than passing harsher punishments."

The sensitive sort of solutions and sage advice that sees both sides because it comes from a Chief Executive with street cred who spent time in the 'hood as a community organizer en route to the presidency.