Video: Chris Brown's Rep on His Tattoo: It's Not Rihanna 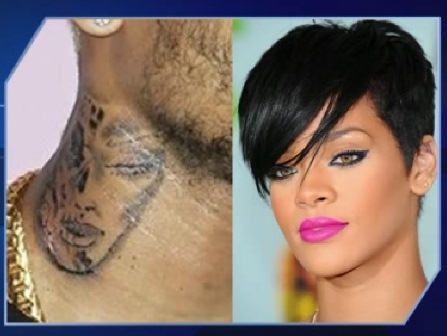 (CNN) -- A new tattoo on Chris Brown's neck is raising some eyebrows.

The singer's new ink is a black-and-white image of what some believe is a woman's battered face. Brown pled guilty in 2009 to assaulting then-girlfriend Rihanna and was ordered to serve five years probation. He also completed community service and a domestic violence program.

A rep for Brown denied that the new body art was of the "Umbrella" singer, or even of a beaten woman.

"His tattoo is a sugar skull (associated with the Mexican celebration of the Day of the Dead) and a MAC cosmetics design he saw," his rep said in a statement. "It is not Rihanna or an abused woman as erroneously reported."

Rihanna has been pretty vocal about her forgiveness of Brown and her desire to move on. She recently told Oprah Winfrey that she "lost her best friend" in the wake of the assault and that she still cares for him, while MTV cameras caught the pair embracing at the Video Music Awards.