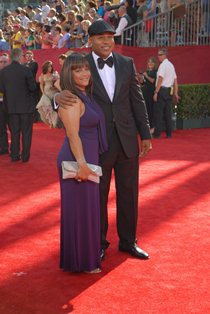 Prosecutors charged Kirby with first degree burglary as a "third striker," which means he could face 38 years to life in prison if convicted, Gibbons said. They are asking that bail for Kirby be set at $1.1 million.

Kirby was previously convicted of voluntary manslaughter in Dallas, Texas, in 1998. He also has auto theft, first degree burglary and a petty theft conviction in Los Angeles on his record, Gibbons said.

Arraignment for the suspect is not yet set, because he is still hospitalized for treatment of injuries inflicted by LL Cool J when he "physically detained" him, she said.

The family was sleeping when their home security alarm sounded at 1 a.m., sending LL Cool J into action, according to a Los Angeles Police statement.

After catching the man, he held him until police arrived, police said.