Who's Landing the Big Interviews After Oprah? It's -- Oprah 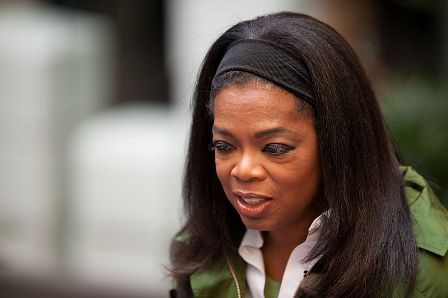 NEW YORK (AP) -- Since Oprah Winfrey packed up the couch that Tom Cruise jumped on and ended her daytime talk show last year, no one has truly filled her role as the top go-to person in television for major celebrity and news interviews.

Now someone is trying to claim that spot -- and would you believe it's Oprah again?

Faced with the potential failure of her money-pit cable network OWN, Winfrey is working the phones hard to secure big-name interviews for her show, ``Oprah's Next Chapter.'' Back-to-back episodes last Sunday featured the Kardashian family and rapper 50 Cent, and the Kardashians will be back this weekend. Michael Jackson's daughter Paris and the late Whitney Houston's family made news with their interviews in recent weeks.

The open question is whether she can have the same cultural impact on a smaller stage. Winfrey's daytime talk show was generally seen by around 6 million people in her final years; ``Oprah's Next Chapter'' with the Kardashians was seen by 1.1 million viewers, according to the Nielsen company.

``I am sure that people have a conversation about that when they are exploring their options,'' said Sheri Salata, OWN president. ``The one constant we have ... is that you have the opportunity to sit down with Oprah.''

Winfrey's daytime show wasn't all about interviews, of course. But in her last few seasons, she sat down for conversations with the likes of Tina Fey, Elizabeth Edwards, Michelle Obama, Madonna, Denzel Washington, Jerry Seinfeld, Richard Branson and Beyonce.

The audience was primarily women but, as Cruise proved with his eager declarations of love for Katie Holmes in 2005, the cultural impact could spread beyond the afternoon.

``Doing an interview on one of those shows was like Johnny Carson asking you to come sit with him after you've done your stand-up,'' said Robert Thompson, director of the Bleier Center for Television and Popular Culture at Syracuse University. ``If there was any equivalent to playing the Palace at the end of the 20th and beginning of the 21st centuries, being on `Oprah' might have been it.''

While Thompson said that ``half the people can't find OWN on their cable television,'' that may underestimate Winfrey. The ``Oprah's Next Chapter'' episode with Houston's family in March premiered to 3.5 million people, Nielsen said. Many others heard about it or saw clips.

Winfrey's presence in daytime was a mixed blessing for veteran Hollywood publicist Howard Bragman. Most of his clients wanted to be on ``Oprah'' and were convinced they had a story she wanted to hear. When they did, it was great.

When they didn't, not so great. ``It was a ton of pressure,'' he said, ``and there's a part of me that is happy the pressure has lifted.''

Now he can suggest a media strategy with interviewers who can reach his clients' target audiences. Bragman often goes retro, preferring the news divisions at broadcast television networks.

Ellen DeGeneres is probably the leading personality in daytime now, but her show is about entertainment. Dr. Phil and Anderson Cooper get some interviews, as does ``The View'' and ``The Talk.''

None has the impact that Winfrey had on a consistent basis, said Bill Carroll, an expert in the syndication market for Katz Media.

Also missing from the scene is CNN's Larry King, who didn't have the same juice as Winfrey but had a friendly reputation that made him a popular stop for people with hard stories to tell. King's replacement, Piers Morgan, is not as established and is dragged down by CNN's ratings problems.

Katie Couric, whose daytime talk show starts in the fall, could be Winfrey's true heir as an interviewer in daytime. Her lengthy tenure at NBC's ``Today'' show makes her able to deftly switch from world leaders to actors to quirky celebrities enjoying 15 minutes of fame. ``Not many people can do that,'' Bragman said.

First things first, however. Couric needs to build a show and prove that people want to watch her. Establishing booking superiority before Couric starts could benefit Winfrey.

While ``Today'' and CBS' ``60 Minutes'' are able to land strong interviews, no television organization has been as aggressive as ABC News in seeking the big ``gets.'' The latest example is this week, with the network giving a prime-time platform to Chris Cuomo's interview with former presidential candidate John Edwards' mistress Rielle Hunter.

Diane Sawyer was rewarded last summer when her interview with Jaycee Dugard, who had been held captive by a sex offender for 18 years, had the best summertime ratings of a newsmagazine since 2004. Her November interview with Rep. Gabrielle Giffords about recovering from being shot in the head was seen by more than 12 million people.

There's more to ABC's efforts than filling a void left by Winfrey, said Eric Avram, who runs the network's interview bookings. Still, he doesn't miss her.

``Oprah obviously had an enormous presence and her iconic show was one of our biggest competitors,'' he said.

ABC usually gives its interviews wide exposure, on shows like ``Good Morning America,'' `'World News'' and ``Nightline,'' and will often give interview subjects an hour in prime-time. ABC News' content sharing deal with Yahoo! also guarantees a wide web presence for the stories.

Having Couric in-house enabled ABC News to secure interviews with some British royal family members this spring, but delicate issues loom. Couric will remain with ABC News but her first allegiance will be to her talk show, which is syndicated and will be seen on some non-ABC stations. That leaves unclear whether ABC will be able to use interviews that Couric gets.

While ABC is doing well now, Bragman said not to underestimate NBC and the competition between the two. ``They are both working very hard now,'' he said.

So is Winfrey, Salata said.

``If somebody has a rough story and wants to be more than a movie star or more than a pop singer, they know they're going to get that opportunity with Oprah,'' she said. ``That is a huge advantage. That really does keep us in the game with all the big interviews.''