Books: 'The Rich and the Rest of Us: A Poverty Manifesto,' Tavis Smiley and Cornel West

Kam Williams Special to The Skanner News
Published: 04 May 2012 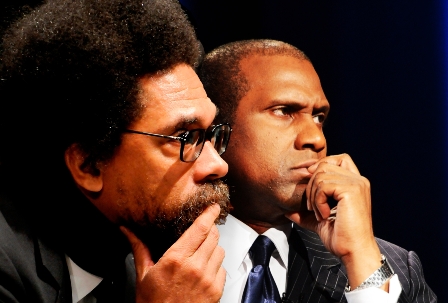 "This book serves as a counterpoint to [those] who luxuriate in denying the reality of America's poor… Poverty of all colors abounds unchecked in our cities, suburbs, and rural communities…

Poverty is no longer confined by class or color; like an unrestrained deadly virus, it doesn't discriminate… [And] we are dangerously close to cementing a permanent American catastrophe…

Our intent with The Rich and the Rest of Us Is to make [people] think about the pervasiveness of poverty, its real causation, and the threat it poses to our democracy.  We want to raise awareness about poverty and discuss how best to end it—in our lifetime."

Last summer, Tavis Smiley and Cornel West embarked on a cross-country bus tour to bring attention to the plight of the approximately 150 million citizens living at or below the poverty level. Some segments of the black community saw the dynamic duo's shining a light on the crisis as a slap in the face of President Obama, whose administration had already been the subject of biting criticism for its bailing out of Wall Street ostensibly at the expense of Main Street.

Now, the two inveterate firebrands share what they witnessed on that peripatetic caravan in "The Rich and the Rest of Us," an eye-opening opus which discusses the burgeoning phenomenon of poverty in chilling detail via a combination of statistics and anecdotal evidence. And after making their case that time is of the essence, because the situation is rapidly deteriorating, Smiley and

West close the tome with an urgent call to conscience and a dozen suggestions about what needs to be done next.

Many of their solutions, such as jobs for the unemployed, access to healthcare for all, lowering the incarceration rate, ending mass hunger, mortgage foreclosure relief for struggling homeowners, and taxing the filthy rich, tend to invoke universal notions of fundamental human rights. However, these mass-scale dilemmas only serve to direct your attention right back to the President, given that he's the chief executive charged with setting the national agenda.

On paper, President Obama is on record as a man of the people since he first campaigned on behalf of a litany of liberal initiatives like allowing the Bush tax cuts to expire for anyone making over $250,000/year. But upon taking office, he was repeatedly blocked from implementing his progressive policies by right-wing Republicans.

This begs the question: How much power does the office of chief executive carry? Sure, there's the historical precedent of Lincoln freeing the slaves by executive decree alone. And yes, FDR threatened to pack the U.S. Supreme Court to ensure the Constitutionality of the New Deal, while LBJ twisted the arms of his former colleagues in Congress to get the Civil Right Act passed.

So, why hasn't Obama delivered in similar fashion? That is the subtle undercurrent running through The Rich and the Rest of Us. The authors cleverly lead the reader to the unavoidable conclusion that the President, if sincere, might have to forget about waiting for a bipartisan consensus and be willing to make a few enemies if America is to reverse a hidden, heartbreaking tragedy which continues to escalate just out of public view.