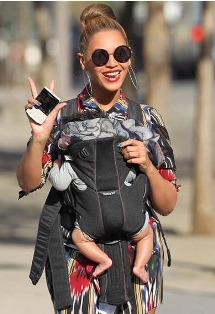 NEW YORK (AP) -- People magazine has named Beyonce as the World's Most Beautiful Woman for 2012.

The 30-year-old singer tops the magazine's annual list of the "World's Most Beautiful" in a special double issue. The announcement was made Wednesday.

Commenting on her selection, Beyonce tells People: "I feel more beautiful than I've ever felt because I've given birth. I have never felt so connected, never felt like I had such a purpose on this Earth."

Beyonce, who is married to rapper Jay-Z, gave birth to a daughter, Blue Ivy Carter, in January.

"She's just the cutest thing," says the Grammy winner, who sings to her daughter and claims to "love" changing diapers.

Does Blue resemble mom or dad?

"She looks like Blue," the singer says. "She's her own person."

"The best thing about having a daughter is having a true legacy," she adds. "The word `love' means something completely different now."

Other celebrities on the list include Julia Roberts, Nicole Kidman and Jessica Pare of "Mad Men."