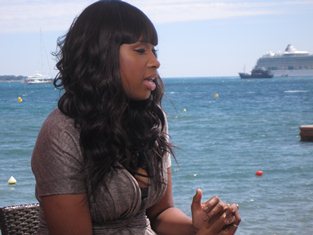 CHICAGO (AP) -- Singer and actress Jennifer Hudson left the witness stand and took a seat in the courtroom before the trial of the man accused of killing her mother, brother and nephew broke for lunch.

Hudson testified for about 30 minutes Monday at the start of William Balfour's murder trial. She started answering questions calmly but became emotional the longer it went on.

Balfour has pleaded not guilty to three counts of first-degree murder in the 2008 slayings. He was married to Hudson's sister at the time but they were estranged.

Prosecutors allege that Balfour killed the victims in a jealous rage because his estranged wife had a new boyfriend.

Oscar-winner Jennifer Hudson broke down in tears Monday while testifying at the trial of the man accused of killing her mother, brother and 7-year-old nephew in a jealous rage four years ago.

Hudson was the first witness called after prosecutors and attorneys for William Balfour finished their opening statements. During her brief but emotional testimony, she told jurors her family didn't want her sister to marry Balfour. She also spoke about the last time she saw her family members.

The singer and actress, who wore a subdued black dress and whose hair was wrapped in a bun, at first seemed composed as a prosecutor began asking her question. But the testimony became increasingly difficult, and she began crying when talking about seeing her family the Sunday before the killings.

Earlier, her voice broke as she described her reaction when her sister, Julia Hudson, told her she was going to marry Balfour.

"None of us wanted her to marry him," she said, her voice cracking and struggling to hold back tears. "We did not like how he treated her," she said.

Balfour has pleaded not guilty to three counts of first-degree murder in the October 2008 slayings.

After more than 30 minutes on the stand, Hudson picked up a fistful of tissues and walked slowly across the courtroom directly in front of jurors. She then took a seat in the fourth row next to her fiancé.

During opening statements, prosecutor Veryl Gambino said that Balfour began threatening to harm the family after moving out of Hudson's family home.

"Those were not idle threats. ... They were deadly warnings of what was to come," Gambino told the Cook County jury.

Defense Attorney Amy Thompson offered jurors another take on the killings, telling jurors police pinned them on Balfour because they felt pressured to make an arrest.

"As soon as that (that a celebrity was linked to the case) became known, they knew coverage would explode," Thompson said. "The police were on the hook. They had to find their man and find him fast."

Hudson, 30, was among 300 potential witnesses who could be called to testify during the trial, which could take up to a month.

Lead prosecutor James McKay has said that the day before the attack, which was Julia Hudson's birthday, he told her "If you ever leave me, I'm going to kill you, but I'm going to kill your family first." She didn't take him seriously, McKay said, because Balfour hadn't acted on the threats before.

Prosecutors say Balfour became enraged by balloons he saw at the home that he thought were from Julia Hudson's new boyfriend. She told investigators that on the day of the killings, she saw Balfour linger behind as she was driving off from home to her job as a school bus driver.

Prosecutors say Balfour went back inside the three-story house around 9 a.m. and used a .45-caliber handgun to kill Hudson's mother, 57-year-old Darnell Donerson, in the living room, and then shot her 29-year-old brother, Jason Hudson, twice in the head as he lay in bed.

He allegedly drove off in Jason Hudson's SUV with Julia Hudson's son, Julian King, inside. Authorities say he shot the boy nicknamed Juice Box in the head as he lay behind a front seat. His body was found in the abandoned vehicle miles away after a three-day search.

There are no known witnesses to the slayings, and it's unclear what physical evidence exists, including fingerprints or DNA. Prosecutors say gunshot residue was found on the steering wheel of Balfour's car. But the defense says it and other evidence is circumstantial.

A gun, which Balfour allegedly stole months before from Hudson's brother, was recovered in a lot near where the SUV was found and will be presented as the murder weapon.

During her opening statement, Thompson said DNA found on the gun and finger prints found in the SUV didn't match Balfour's.

Establishing motive may pose less of a challenge for prosecutors.

A high-school dropout and one-time Gangster Disciple known by the gang name "Flex," Balfour allegedly threatened to kill the Hudson family at least two dozen times, starting earlier in 2008 when he moved out of the house, McKay has said.

If convicted of at least two of the murder counts, the 30-year-old Balfour, on parole at the time of the killings after serving nearly seven years for attempted murder and vehicular hijacking, would face a mandatory life sentence.

Jennifer Hudson, the 2004 "American Idol" finalist and 2007 Oscar winner for her role in "Dreamgirls," is expected to attend each day of testimony.

Judge Charles Burns has instructed jurors to set aside any sympathy for Hudson and decide a verdict strictly according to testimony. The panelists include a teacher, a trucker and two people who have had close relatives murdered.

Prosecutors have said Balfour claimed he wasn't near the Hudson home at the time of the killing, but they are expected to introduce cellphone records that allegedly prove he was in the area when two teenage girls who live nearby heard gunshots.

The witnesses didn't immediately report the shots to police because the sound of gunfire isn't uncommon in the impoverished, crime-ridden Englewood neighborhood, according to court filings.

The trial is being held in a nearly century-old, oak and granite courtroom where several TV legal dramas have been filmed. It's the same courtroom where R&B singer R. Kelly was acquitted on child pornography charges in 2008.