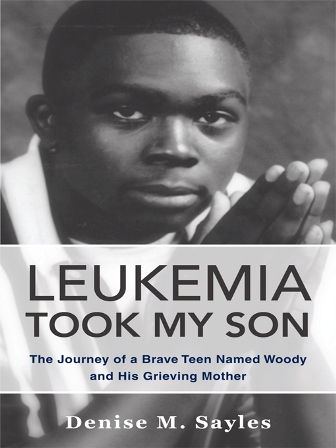 Denise Sayles lost her son to leukemia ten years ago; today she is dedicating her life to making sure other moms – and their kids – have better options in the face of cancer.

"Woody was a courageous, ambitious person," she says. "He was full of life. Full of fun."

After years of grieving, she decided to channel her loss into a book titled "Leukemia Took My Son: The Journey of a Brave Teen Named Woody and His Grieving Mother."

Sayles is using the story to implore people of all backgrounds to see the importance of childhood cancer screening and donating blood.

According to the Leukemia and Lymphoma Society (LLS), there were an estimated 274,930 people living with leukemia in 2011, plus 44,600 new cases and 21,780 leukemia deaths estimated for the past year.

"I wrote this book out of pain," says Sayles. "I lived in pain for so long and decided I wanted to turn this pain into a positive thing."

Sayles learned of her son's leukemia after an emergency trip to the doctor. He had found a lump under his arm but exhibited few other side effects.

The doctor performed a biopsy of the lump and informed the family that Woody had leukemia. According to the doctor, he would only have six months to live if he didn't start chemotherapy immediately; unfortunately in his case chemotherapy and radiation weren't able to eradicate the disease.

Woody's weakened body rejected a bone marrow transplant because of complications with his immune system. Sayles says his white blood cells were too weak to balance with the transplant.

The family had a brief window of hope when former Portland Trailblazer and NBA all-star Brian Grant came into Woody's life.

"The doctor sent Brian to Woody as an angel in disguise," says Sayles. "He was the first to donate blood."

She dedicates an entire chapter in her book to the relationship Grant and Woody shared.

Grant helped organize what was the largest blood drive in Oregon and Washington history at the time. It had over 400 participants with the hope of finding a match for Woody and doubling registry.

Despite these efforts, Woody wasn't able to be saved; he died at the age of 18, while still attending Jefferson High School.


Two years after his death, Sayles moved to San Diego where she discovered she had a passion for writing.

She hopes that the painful experience she details in her new book will help raise awareness and educate people on the specifics of leukemia. Sayles says a big focus of her book is to provide readers with useful information, such as the different categories of leukemia and symptoms to look for.

Woody had ALL, which is the most common type for children. It also affects adults, specifically those 65 and older. According to LLS, the overall survival rate for ALL is 66.4 percent and 90.8 percent for children under five.

CLL most often affects adults 55 and older. It is incurable. According to the National Cancer Institute, the five year survival rate is 75 percent.

AML is more common in adults than children and occurs more often in men than women. It has a five year survival rate of 40 percent.

CML occurs mostly in adults. It has a five year survival rate of 90 percent.


Sayles' book also addresses how many flu-like symptoms can be warning signs for cancer.

She says it's crucial to pay attention to a child if he or she gets fever, fatigue and weakness. Other symptoms include frequent infections, losing weight, swollen lymph nodes, easy bleeding and bone pain.

"Parents need to be aware of the symptoms," says Sayles. "If a child has these symptoms then rush him to the hospital because they could be deadly."

In addition to her book, she has also created the Facebook group Open Mind Discussions to encourage people to tell their stories and turn grief into joy. Sayles says it has helped provide support for grieving mothers.

"My son was a very cool kid," says Sayles. "I sat and cried but he never did. If you're 18 and over, donate your blood. It can happen to anyone. It could be your brother or sister."