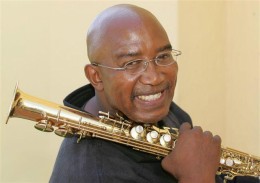 JOHANNESBURG (AP) -- The 60-year-old beloved South African musician shows up five days a week to sit behind a scarred desk in a bare-bones classroom, studying for the high school diploma he missed when he dropped out to pursue a career in rock, funk, soul and jazz.

And Sipho "Hotstix" Mabuse wants the faith he is showing in learning to inspire a battered community.

Returning to school "is for me. But it's not about me," Mabuse said in an interview in his Soweto home, decorated with souvenirs from his European, U.S. and Mideast travels.

Mabuse, his round, unlined face animated beneath a shaven pate, said some of his friends and fellow musicians were baffled when he told them he was going back to school for what's known here as a National Senior Certificate, or, more commonly, a matric.

"Sipho is a perfectionist," Masondo said. "In typical Sipho style, he wants to go through the right routes and do the right thing."

Mabuse often paces his tile floors as he practices his saxophone. He also plays the flute, piano and other instruments as well as the drums that gave him his nickname.

He has performed with Percy Sledge, Wilson Pickett, Miriam Makeba, Hugh Masekela and Paul Simon, giving the last a tour of Soweto when the American was here to work on "Graceland."

With his money, Mabuse could have hired a tutor to get him through the matric exams. With his connections, he could have found a university to take him on as a researcher. Instead, he's enrolled in classes offered to adults after the day of learning for younger students is complete. The public school is just around the corner from his home in Soweto, the township where he was born and raised.

Japie Masombuku, who runs the adult education program at Thaba-Jabula Secondary School, said he asked his most famous student to give a motivational talk one afternoon. To Masombuku's surprise, even students who were habitually late to class or often skipped class showed up, and now many are more responsible.

One of Mabuse's classmates, 27-year-old Nikiwe Mpande, left high school to take a secretarial course and start work. She said the lack of a matric was keeping her from getting promotions, but she didn't seriously consider returning to school until she heard about Mabuse.

He's shown her "you're never too old to actually finish school."

Mabuse is a local hero in Soweto, known as a cauldron of resistance to apartheid. In 1976, Soweto high school students set off nationwide protests when they rose up against inferior education.

Apartheid politicians created curricula meant to ensure blacks could aspire to be no more than servants for whites. For decades, the bulk of spending on education was reserved for the white minority.

Apartheid ended in 1994, but most teachers today are the products of apartheid education. They are ill-equipped to prepare their students for the 21st century, which may explain some of the angry frustration that characterizes frequent teacher strikes for higher pay. The students, taking a cue from their teachers, treat their schools with contempt, arriving late and showing little discipline in class.

Across South Africa, more than half a million members of the class of 2011 dropped out or otherwise disappeared before the 496,000 remaining took their final exams. Only a quarter of those who graduated did well enough to qualify for university study, according to government figures.

A government report released last month said public adult education programs haven't escaped the chaos. According to the report, facilities are spare, curriculum unfocused, teachers weak, and most of the more than 300,000 students who enrolled in such classes along with Mabuse last year failed to progress.

In the 1960s, Mabuse's Orlando West High School had no library or science lab. Many schools in impoverished black communities still lack such basics.

Matseke, himself a musician and composer, tried to persuade Mabuse to stay in school back in 1969, Mabuse said. But he and the fellow classmates who had formed a band were making money and earning admiration from girls at weekend performances.

One day, his mother went looking for Mabuse at Orlando West and no one could tell her where he was. She found him and his bandmates at a tailor's, trying on new stage costumes.

"She just said, `Oh, so this is your new school uniform?'" Mabuse recalled, saying she then dragged him back to school, where a teacher administered a beating.

When Mabuse has to miss class these days, he calls his teachers to apologize. He addresses teachers who are 20 years his junior as sir. And while the teachers might keep quiet when fellow students in their 20s answer their cell phones in class, Mabuse is not shy.

Mabuse also has been known to scold children he runs into in the streets during the day, telling them they should be in school.

"On the continent, presidents are like kings. We cannot challenge them, because we have little knowledge," he said.

Mabuse's own pursuit of knowledge hit a setback last year, when he tried to take all six classes he needed to obtain his matric. He was too impatient to listen to teachers who told him that was too heavy a load for a man with his busy schedule. He failed two classes.

This year, he's confident he'll pass his remaining classes. And he says he's not embarrassed to tell people he had to try again.

He plans to go on to university to study musical anthropology. His goal is to write a book after interviewing his elders about what has shaped traditional music in South Africa, and how those traditions still ring.

He grew up listening to his grandfather and uncles singing a traditional choral form known as scatamiya.

"Maybe I can make a contribution in how we see ourselves. How we hear ourselves," Mabuse said.

Donna Bryson can be reached at http://twitter.com/dbrysonAP