NEW YORK (AP) -- As Jay-Z transitioned from hit song to hit song at a Carnegie Hall concert Monday night, so did the lighting, changing from red to white to blue.

The veteran rapper then performed his latest hit, "Glory," about his 1-month-old daughter with Beyonce, Blue Ivy Carter.

"I didn't think I was going to make it through that one," he said, sounding emotional. "That was tough."

It was one of the many jams Jay-Z performed at New York's famed venue, his latest achievement in music domination.

The rapper is the second hip-hop act to perform at Carnegie Hall. Wyclef Jean did so in 2001 with Stevie Wonder, Eric Clapton and Whitney Houston.

Jay-Z was joined by fellow New Yorkers Alicia Keys and Nas. He was backed by an orchestra of 30-plus and a band that included Questlove of The Roots and neo-soul singer Bilal. It was one of two shows for charity planned this week.

The Grammy-winning rapper, born Shawn Carter, started off in a black-and-white tuxedo, bowtie and black sunglasses, commanding the stage with confidence in a somewhat unfamiliar territory: The audience was mostly men in suits or tuxedos, and women in conservative dresses. About 2,800 people filled the hall.

Though some tickets were sold to the public, most were offered in a private sale, going from $500 to $2,500. The proceeds will benefit the United Way of New York City and the Shawn Carter Scholarship Foundation, which helps low-income students cover college costs. Students from Jay-Z's foundation also attended the show. 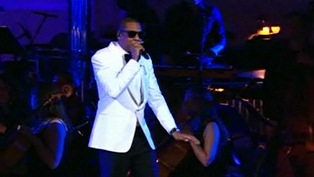 Changing into a black tux, Jay-Z performed "Empire State of Mind" with Keys, who wore similar attire. Nas followed with his song "N.Y. State of Mind."

"Make some noise for the Giants," yelled Jay-Z, giving a shout-out to the recent Super Bowl champions.

Jay-Z changed outfits once again, this time to a black T-shirt, black pants and a black cap. He traveled to the second floor and began to rap songs from the top of a chair.

He gave shout-outs to some of those missed in music, from the Notorious B.I.G. to Aaliyah to Don Cornelius. He also gave a shout-out to Liza Minnelli, who waved to the audience before Jay-Z hit the stage.