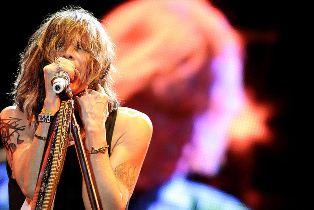 LOS ANGELES (AP) -- If the U.S. Supreme Court is willing to listen, rocker Steven Tyler has something "old school" to say about nudity and profanity on broadcast TV.

"There's a certain charm and passion and magic in not showing full-frontal nudity" or using constant profanity, Tyler said, as the high court prepared to take up a First Amendment case on the regulation of the airwaves.

"It's really hot when you only show a little," he said.

Granted, the Aerosmith singer tossed off a bleeped strong expletive or two on Fox's live "American Idol" after joining it as a judge last season.

"I have (cursed on air) a couple times, because it is 2012," Tyler said. But an occasional swear word is different than a stream of them, which he suggested could happen without rules and wouldn't be something he welcomes.

Besides, he said, where's the creativity? A pun about an "American Idol" contestant's revealingly short outfit may be fun - "Here's to looking up your old address," offered Tyler - but the use of blunt language "turns it into something crass."

"Why would I say that? I would say it to show off, I think," he added.

There are pejorative terms, such as those involving race and gender, that never should be heard on TV, said Tyler. He returns to "Idol" with fellow judges Jennifer Lopez and Randy Jackson for the singing contest's 11th season, starting Jan. 18.

The Supreme Court case set to be heard Tuesday could reshape the regulation of broadcasting.

In 2010, the federal appeals court in New York threw out the Federal Communications Commission's rules affecting the hours children are likely viewers. That includes a ban on the use of even a single curse word on live TV as well as fines against broadcasters who showed a woman's nude buttocks on a 2003 episode of ABC's "NYPD Blue."

The Obama administration has objected that the appeals court stripped the FCC of its ability to police the airwaves, and the commission is appealing the ruling.

The FCC's policy against fleeting expletives was set after a January 2003 NBC broadcast of the Golden Globes awards show, in which U2 lead singer Bono uttered the phrase "f------ brilliant."

The FCC found its ban was also violated by a December 2002 broadcast of the Billboard Music Awards in which Cher used the phrase "F--- `em" and a December 2003 Billboard awards show in which reality show star Nicole Richie said, "Have you ever tried to get cow s--- out of a Prada purse? It's not so f------ simple."

The commission's stepped-up broadcast indecency enforcement in recent years, including record fines for violations, was spurred in part by public outrage over Janet Jackson's breast-baring performance during the 2004 Super Bowl halftime show.

TV networks - including Tyler's home base, Fox - argue that the FCC's policy is vague, irregularly applied and outdated, affecting only broadcast television while leaving unregulated the same content if it's delivered on cable TV or over the Internet.

Tyler predicted Monday the Supreme Court will allow "certain words, and that's that."

Fox is a unit of News Corp.