Jay-Z Raps About Birth of Daughter with Beyonce 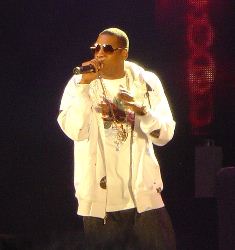 NEW YORK (AP) -- Through a rap verse, Jay-Z has confirmed the birth of "the most beautiful girl in the world" - his newborn daughter.

The song "Glory" made its debut on his social website Life and Times on Monday - two days after he and Beyonce reportedly gave birth to a daughter, Blue Ivy.

Reps for the superstars repeatedly declined requests for comment from The Associated Press about whether the birth had occurred, as first reported by E! News over the weekend. But Jay-Z's sweet song gives fans the details, and more: "You're my child of a child from Destiny's Child."

In the song, Jay-Z talks about where the child was conceived (in Paris) and even reveals that Beyonce had a miscarriage at one point.

"Last time the miscarriage was so tragic/We was afraid you'd disappear/But nah baby you magic."

The song's refrain is: "The most amazing feeling I feel/Words can't describe what I'm feeling for real/ Maybe I paint the sky blue/My greatest creation was you. You. Glory."

The sound of a baby's cries - perhaps Blue's - ends the song. The song says it features "B.I.C." - which would be the initials of Blue Ivy Carter.

It's the first child for the power couple, who wed in 2008 in a private ceremony after a years-long courtship. Beyonce announced her pregnancy to the world last August at the MTV Video Music Awards with a simple rub of her swollen belly.

Celebs close to the couple have tweeted congrats. Beyonce's sister, Solange Knowles, tweeted Sunday morning: "The most beautiful girl in the world," while Beyonce's close friend Gwyneth Paltrow also tweeted: "Welcome to the world Blue! We love you already."

The couple reportedly gave birth at Lenox Hill Hospital on New York's Upper East Side on Saturday. While there were reports that the couple paid $1.4 million to rent a floor of the hospital for the birth, hospital spokeswoman Barbara Osborne said Monday that "no patient has the ability to reserve an entire floor of the hospital."

While she refused to confirm or deny that Beyonce had given birth there, she said that like other hospitals, suites are available and can be reserved.

One new mother, Rozz Nash-Coulon, said her twins, born Dec. 28, were in the neonatal unit, and starting Friday, intense security measures were implemented and it was a struggle to see her own children as security guards directed hallway traffic. She said a nurse told them Jay-Z and Beyonce were staying at the hospital.

"Once they checked in there was high security everywhere. It looked like the president was on our floor. The hospital's security cameras were taped over. Internal windows from the hallways into the ward were blacked out," said Nash-Coulon, 38.

Nash-Coulon said she and other parents are trying to mobilize to protest their treatment, which she called "disgusting." But Osborne said she had not heard anything about any complaints. She also could not confirm or deny reports that security cameras were taped over.

As for areas of the hospital being blocked off to some, Osborne said: "I can't specifically talk about that but I can tell you that visitors can be asked to leave a waiting area in our hospital for any number of reasons."

Nekesa Mumbi Moody is the AP's music writer. Follow her at http://www.twitter.com/Nekesa mumbi