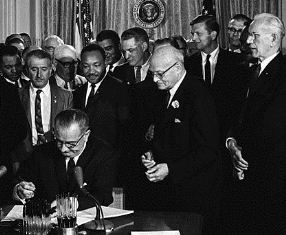 NEW YORK (AP) -- A veteran Washington reporter's book about the landmark 1964 Civil Rights Act will be released upon the legislation's 50th anniversary.

Times Books, an imprint of Henry Holt and Company, announced Sunday that it will publish Todd S. Purdum's "More Powerful Than All the Armies" in 2014. Purdum has been Vanity Fair's national correspondent since 2006 and previously worked more than 20 years for The New York Times. He was represented by Robert Barnett, the Washington-based attorney whose clients include President Barack Obama and former President Bill Clinton.

The publisher is billing the book as "a behind-the-scenes look at the historic bill's passage as seen through the prism of the legal, personal, and political dramas of that time and the political and cultural figures involved."

The Civil Rights Act, signed into law by President Lyndon Johnson, banned racial segregation and other discrimination. The most sweeping civil rights legislation since Reconstruction, it was stalled on Congress at the time of President Kennedy's assassination, in November 1963. Purdum said in a statement that with Washington currently so "dysfunctional" it was inspiring to tell a story of how "Republicans and Democrats worked together." According to Times Books, he will draw upon "unpublished memoirs, oral histories, contemporary news accounts, original archival documents and interviews with the dwindling ranks of surviving participants."