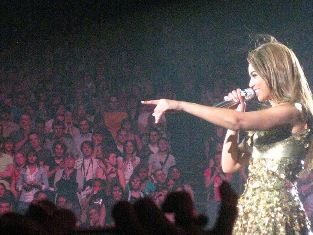 NEW YORK (AP) -- It's tough to keep a pregnancy a secret when you're in the public eye, and for a while, Beyonce thought the jig was up.

"The whole time I definitely was thinking, `Everyone knows, everyone can see,'" said the singer before the screening of her new concert DVD Sunday in New York.

It became particularly difficult for her to hide the growing baby bump when the Grammy-winner performed for four nights to sold-out crowds at New York's Roseland Theater in August.

"When you're pregnant, it's a little bit harder to breathe, so it was hard doing all the choreography and singing at the same time," said the 30-year-old singer in an onstage interview.

Fans who didn't get a chance to catch "The Intimate Nights" shows - what Beyonce said was her last concert performance of the year - can get a behind-the-scenes look in her new "Live at Roseland" DVD, available exclusively at Walmart this week. The deluxe two-DVD set is available everywhere on 11/29.

Along with classics from her Destiny's Child days and major hits from her solo career, the DVD includes interviews with the singer, home footage of rehearsals and special family moments - even shots of Beyonce in a wedding gown.

She's also hoping the film will serve as a time capsule for her unborn child, a chance for him or her to say, "I can't believe I was in that belly," she said.