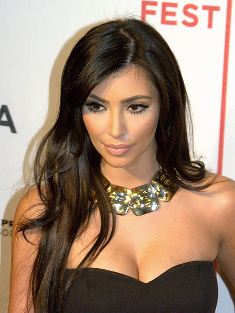 SYDNEY (AP) -- A grim-looking Kim Kardashian said "intuition" led her to end her 72-day-old marriage, insisting in an Australian television interview on Thursday there was no "right or wrong" way to handle the situation.

The hosts of Australia's "Sunrise" program grilled the 31-year-old reality TV star on how hard she worked to save her brief marriage to pro basketball player Kris Humphries, asking whether she had sought counseling before filing for divorce.

"I think when you know so deep in your heart that you just have to listen to your intuition, and follow your heart," Kardashian replied. "There's no right or wrong thing to do."

Kardashian, who is in Australia with her sister Khloe to promote a line of handbags, has faced withering criticism since she filed for divorce from Humphries on Monday after just 10 weeks of marriage. Her lavish, black-tie wedding was featured in a two-part, four-hour special on the American entertainment network E!, and critics have called it a greedy, moneymaking publicity stunt that garnered her millions of dollars. E! executives denied they orchestrated the nuptials.

"I think what really just, I think, upsets me most is that there has been from the start so many rumors of money and dollar signs ... and so much of it not being true," Kardashian said.

But when pressed to more directly address the accusations that the marriage was a sham, the stony-faced star replied: "I think that's all I'm really going to say about the situation right now, and just kind of focus on why we're here in Australia."

She and Khloe then quickly steered the conversation to their "Kardashian Kollection" handbags.

In a separate interview on Australia's Channel 10, Kardashian insisted she "married for love."

"Anyone that would get married for a TV show - it's just, you know, ridiculous," she said. "And it's just sad that I even have to defend that."

She also said she has not decided what to do with her 20.5-carat engagement ring, or with the gifts she received from her $172,000 wedding registry.

Kardashian rose to fame after a sex tape featuring her and a former boyfriend went public. She parlayed her notoriety into modeling gigs, a lucrative reality TV empire and fashion and beauty lines.