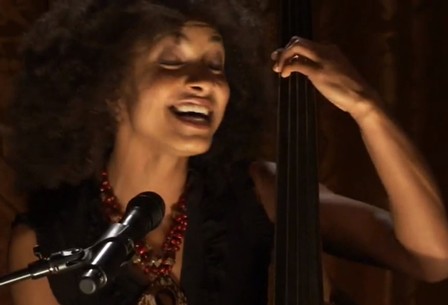 Spalding, a Portland native who bested superstar Justin Bieber at the Grammy Awards to win this year's Best New Artist title, appears Aug. 23 at 7:30 p.m. at the Gerding Theater at the Armory, 128 NW 11th.

Tickets are $35-$50 and $100 for VIP, which includes a VIP reception with Esperanza at 6 p.m. Tickets are available here.

Memory, who himself taught Spalding at Portland State years ago, is a Portland jazz icon who has clocked many years of youth involvement. His band rehearses three days a week at DaVinci Middle School.

The benefit comes at a critical time, as the disabled jazz music teacher recently had his specially-modified trumpet stolen. Although it was recently recovered, Memory says the instrument was damaged and requires repairs. Valuable mouthpieces stolen with it were lost.

Memory's students have gone on to colleges including the Berklee College of Music in Boston, Mass. (which Spalding attended); the Juilliard School of Music in New York, and many other universities.

Spalding moved away from Portland years ago, and now has two homes: one in the West Village in New York, one in Austin, Texas, according to the New York Times Style Magazine.

In the interview Spalding describes her upcoming CD as "part 2" of her 2010 release, "Chamber Music Society." The new recording is called, "Radio Music Society," and is scheduled for release in February, 2012.