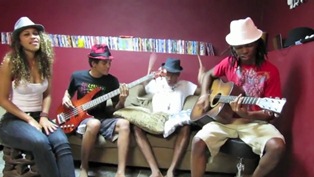 She picked newcomers Cover Drive to back her at an Aug. 5 show for 20,000 in her homeland, which ensured strong notice for the newcomers. The group consists of bass player Jamar Harding, rapper/drummer T. Ray Armstrong, lead singer Amanda Reifer and guitarist Barry Hill.

The quartet told The Associated Press that backing up Rihanna was the best 20 minutes of their lives and they would love to have an amazing career like hers. They are now based in London and are scheduled to perform Aug. 29 during the Notting Hill Carnival.

They cited Rihanna as one of their key musical influences, along with the Black Eyed Peas, No Doubt and Bruno Mars.

"We are huge Rihanna fans, I mean massive, and when we found out we were going to open for her our brains melted," Reifer said in the interview last week. "She was amazing, she's really supportive."

Cover Drive built up its fan base by putting videos on YouTube called the Fedora Sessions. Their cover of Train's "Hey, Soul Sister" got so much interest it lead to a record deal. Now they're releasing their debut single, "Lick You Down" in Britain on Aug. 28.

"You have a nice, amazing drink of Caribbean music," said Reifer. "It means it's feel-good, it's fun, it's fresh, it's sun shining, it's all the things we like to use to describe our music."

Not bad for an act who initially met when Reifer was baby-sitting Armstrong.