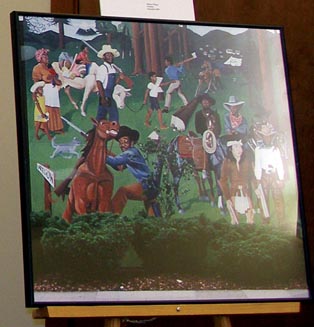 In 1978, artists Henry Frison and Isaka Shamsud-Din collaborated on the Albina Mural Project, an ambitious, three month mural display that adorned the sides of the Department of Human Services building on Alberta Street and Vancouver Avenue.

This week, pictures from the now-defunct murals are on display at the Humboldt Gardens community room at 5033 N. Vancouver Ave. until March 4 at 5 p.m.

On Monday, speaking at the art reception, Frison spoke about his experience creating the 20 foot by 20 foot pieces of art. Straight out of art school, Frison said he had studied mural painting techniques. By creating a scaled grid pattern, Frison was able to transfer the sketched ideas of his painting to a larger canvas.

"We had three months to finish the project," he said. "Myself and Isaac had a lot of late night painting to get it done."

The painting was done indoors on sheets of particle board and later assembled on the sides of the building. A Texas native, Frison wanted a painting to reflect the Black cowboys who first settled Oregon and used pictures of his relatives to inspire him. He also wanted one about his personal hero, Martin Luther King Jr.

While painting the Martin Luther King Jr. painting, he said he included the faces of one of the mural project assistants and her boyfriend, who was in a local rhythm and blues band at the time. To return the favor, the group "Pleasure" wrote a song that included his name.

Unfortunately, the murals only lasted about five years.

"I knew the material we put the murals on wouldn't last too long," Frison said. "I took classes on sign painting. We needed to put it on plastic, but plastic costs so much more."