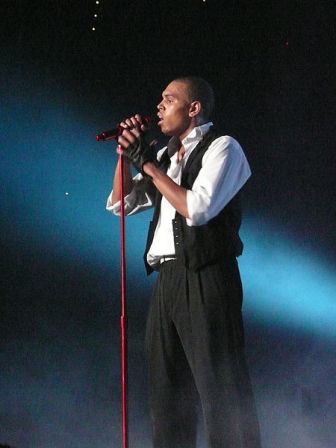 LOS ANGELES (AP) -- The BET Awards honor various arts, but Sunday's ceremony was all about the music.

There were more performances than awards during the 3 1/2-hour show at the Shrine Auditorium, where singer Chris Brown and rappers Lil Wayne, Rick Ross and DJ Khaled did double-duty, each taking the stage twice to perform.

Brown made a few extra trips to the stage as the night's big winner. The 21-year-old won four awards, adding momentum to a comeback that began with his Michael Jackson tribute at the BET Awards last year and continued with his album, "F.A.M.E."

Brown has been working to repair his image since he pleaded guilty to assaulting then-girlfriend Rihanna in 2009. He hit a stumbling block this year when he tore up his dressing room after an appearance on "Good Morning America."

He was named best male R&B artist and won best collaboration for his song "Look At Me Now" with Lil Wayne and Busta Rhymes. The three performed together Sunday as part of a medley of Brown's songs.

"Public-speaking is not my strong suit," he said, thanking BET and his fans before passing the microphone to Wayne, who expressed gratitude to God, his fans and Brown for including him on the track.

Earlier in the ceremony, Brown also thanked his fans and the network, saying, "I appreciate all the support. I know it's been a long road, so I appreciate every blessing in front of me."

Brown was back on stage to join Big Sean on his song, "My Last," and again to close the show, which he did on a bicycle alongside host Kevin Hart, who was on a Segway scooter.

That's when Hart announced that Brown also won the Fandemonium award and the Viewers' Choice prize.

Moments earlier, Drake had accepted the Viewers' Choice award when Rihanna was announced as the winner. But there was apparently a glitch with the digital tablet devices that replaced the show's traditional winners' envelopes.

A fan was brought on stage to announce the winner, and she initially said Brown won. Then she corrected herself to say Rihanna won. Hart clarified after a commercial break that "there was a mistake," and Brown had indeed been the viewers' choice.

Apart from the accidental award acceptance, Drake also appeared on stage with Lil Wayne, Rick Ross and DJ Khaled for a performance on "I'm On One."

Lil Wayne did lots of stage time. He performed with Brown and Drake, et al, and was on stage again when Nicki Minaj won her award for best female hip-hop artist.

"I can't believe for the first time I get to share a moment like this with the person who saw me rapping on a staircase," she said of the rapper and producer, who was incarcerated when she won the same prize last year. "Lil Wayne, I love you."

Mary J. Blige set the tone for the performance-filled program when she opened the show with a pair of hits: "All Night Long" and "Real Love." Surprise guest Anita Baker joined her on stage, and it was a diva duet as the two sang Baker's classic, "Caught Up in the Rapture."

Steve Harvey's acceptance of the Humanitarian Award was punctuated by a gospel celebration, as Donnie McClurkin, Deitrick Haddon and gospel artist winners Mary Mary gathered to perform "Thank You."

Following a musical tribute that included Cee Lo Green wearing a Patti LaBelle-inspired headdress and blouse, LaBelle punctuated her own Lifetime Achievement Award win by performing a couple of classics, including her breakthrough hit, "Lady Marmalade."

Alicia Keys unveiled a brand new song and performed two hits: "Fallin'" and "A Woman's Worth," for which she was joined by Bruno Mars.

The final performance of the night came from across the pond: Beyonce's headlining set at the Glastonbury Music Festival was beamed into the Shrine Auditorium from England.