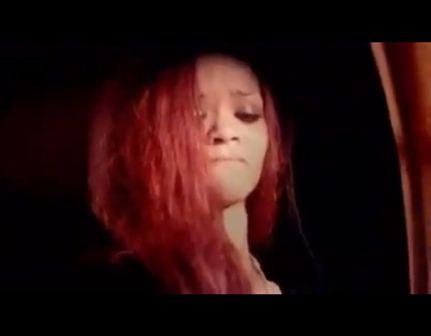 NEW YORK (AP) -- Rihanna is defending her latest music video, which opens with a man being shot in the head.

"Man Down," which premiered Tuesday on BET, is a song about a girl who shoots her abuser in public. The video also portrays sexual assault.

On Wednesday, the Parents Television Council called the clip "disturbing" and asked BET to stop airing it.

But on Thursday's "106 & Park," BET's music video countdown show, Rihanna said the video is "art with a message."

"We just wanted to hone in on a very serious matter that people are afraid to address, especially if you've been victimized in this scenario," Rihanna said.

BET says it will continue to play the video, explaining that the network "has a comprehensive set of standards and guidelines that are applied to all of our content" and that Rihanna's video "complied with these guidelines and was approved for air."

MTV and VH1 have not played the video. Representatives for both networks said they are currently reviewing the video.

BET, MTV and VH1 are owned by Viacom.

Rihanna, who was attacked by then-boyfriend Chris Brown in February 2009, says she doesn't agree with violence.

Brown attacked Rihanna on the eve of the Grammys. He pleaded guilty to a felony and was sentenced to five years' probation.

"I've been abused in the past and you don't see me running around killing people in my spare time," she said.

But the 23-year-old says rape happens too often and those victims need a voice.

"If I can be a voice for so many that aren't heard, then I win twice," she said.

The "Man Down" clip was directed by Anthony Mandler, who has directed other Rihanna videos.

The Grammy winner says she didn't intend to make a controversial music video. She was hoping to display her acting skills and create "something raw and artistic."

The video for "Man Down" has not yet appeared on iTunes. A rep for iTunes said that decision is up to the label.