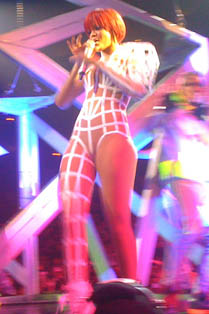 Rihanna and Taylor Swift were two of the key winners at the Billboard Music Awards, which returned after a five-year hiatus with a major dose of star power, featuring Beyonce, U2, the Black Eyed Peas -- even First Lady Michelle Obama.

Like many other awards shows, the three-hour Billboard Awards served more as a promotional vehicle for today's top pop stars than a trophy presentation. The show was packed with performances -- a piano-levitating Cee Lo Green, a scantily clad Rihanna on "S&M" joined by Britney Spears, a much-bleeped Lil Wayne with Mary J. Blige, and Neil Diamond leading the audience in a sing-a-long to "Sweet Caroline" and "America."

Among Rihanna's wins were for radio artist of the year and top female artist.

"The impact of an album is all determined by the fans," she told the audience when she picked up her first. "You've just given me another reason to be completely in love with you."

Beyonce received a special "Millennium" Award for her career achievements: The 29-year-old phenomenon was lauded in a video by an array of legends and luminaries, including Stevie Wonder, Barbara Streisand, Bono, Lady Gaga and Michelle Obama.

"This is a moment I have to soak in because it's gonna be -- and it is -- one of the best moments of my life," said Beyonce after getting the award from her mother, Tina Knowles. Beyonce also performed her new song, "Run the World (Girls)."

U2 was also honored for their blockbuster "360" tour as the top touring act of 2010, while Diamond received Billboard' "Icon" award.

"I would have settled for a top 10 record," he quipped. "I don't know what it means exactly to be an icon. I've always wanted to be one and I guess now I am."

It was held in Las Vegas, broadcast live on ABC and hosted by "The Hangover 2"' star Ken Jeong.

The Billboard Music Awards are given out to music's most popular artists. The finalists and winners are determined by their rank on the Billboard charts and their "social and streaming activity."