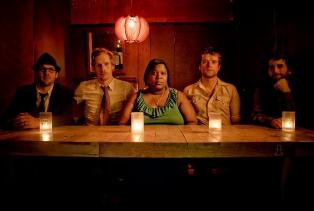 As a former resident of the Motor City, Michael Sharbatz says Motown is in his blood.

For years though, the inner Motown lay dormant in the musician.

The Detroit native had never played a lick of soul music until he migrated West to form his five member band that produces what he likes to call "Garage Soul."

He says it just came to him in a moment of pure inspiration. And Brownish Black was born.

On Friday, April 22, the band will perform at Slabtown to celebrate the release of their freshman EP, "That Love." Brownish Black will be joined by musical guests On the Stairs, The Way Downs and DJ Seoul Brother Number 1. Doors open at 8 p.m.

Sharbatz says his band is a hybrid soul machine that doesn't have many local contemporaries to look up to.

"What it seems like we're doing is taking old soul sounds and infusing  it with a wide array of contemporary indy rock sounds to make a more charged soul sound."

He says most of his inspiration comes from the record bins and the only new album he remembers buying was another soul revivalist – Sharon Jones and the Dap Kings.

"When she came and played the Crystal," he says. "We tried to make it a mandatory band field trip."

For Brownish Black, Sharbatz writes all the songs, but says like any group – which consists of Sharbatz on vocals/guitar, Vicki Porter on vocals, Ethan Boardman on drums/percussion, Mub Fractal on bass/vocals, and Aaron Burget on guitar – the songs become a team effort.

As for the EP, the lead singer tells The Skanner News that the songs are all about the good and bad things that love can bring into life.

To listen to Brownish Black and learn more about the band, visit their website at http://brownishblack.bandcamp.com