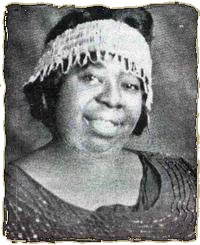 Ma Rainey, in real life, was a ground breaker. She was part of the first generation of female Black recording artists. Her legend was so great that in 1982, playwright August Wilson further immortalized the blues singer in "Ma Rainey's Black Bottom."

Still riding the critical praise of last year's "Radio Golf," The Portland Playhouse will begin its run of "Ma Rainey" this weekend to sold-out audiences. The play follows the turmoil between the legendary entertainer, her bandmates, and a record producer, during a single recording session in the late 1920s toward the end of Rainey's career. The play runs from April 6 to May 1 at the Playhouse, 602 NE Prescott St.

Director Kevin Jones says the blues always played an integral part in the life of Wilson and his writings. And The Blues provides the perfect backdrop for a play about human beings acting out on other human beings.

"I'm not sure if he chose it or it chose him," says Jones, of why Wilson picked the setting he did to tell the story of Black-on-Black violence and racial subjugation in early 20th century America.

For Jones, who chose to direct the play for the Playhouse, Wilson's work on "Ma Rainey" is a huge metaphor about power, born out of old-fashioned American oppression. Photo to the left courtesy Brian Weaver, Portland Playhouse.

Indeed, during a recent rehearsal at the Playhouse, that power dynamic was well at work. Ma Rainey (Julianne Johnson), ready to record, makes a demand that, if not met, will mean further delays to the recording session.

She wants a Coca-Cola.

Mel Sturdyvant (Bruce Burkhartsmeier), the studio's owner, will have none of it.

But despite Ma's dwindling star power, everyone knows she's still a force in the music industry, and is a money maker for Mel. While the White studio owner refuses to help, she gets Slow Drag (Jerry Foster), the band's bassist, to go for her.

Backstage, all the tension and aggression of the play drifts away. The actors are laughing and joking, chiding each other like a bunch of college dorm mates.

With only about a 4-week time schedule to put the play together, Jones says the production is an immersion into the world of Wilson.

Johnson, as the title role, says getting the language right – a hurdle for almost every August Wilson production – is one of the chief challenges of the play.

"The language for me, it's almost like doing Shakespeare. Shakespeare to jazz," she says with a laugh. "We're all just too dang proper these days. You have to be able to go back to not conjugating everything and just giving it a chance to sing. We just keep searching until we find it. And when we find it, the piece just moves seamlessly. And when we lose it, it just comes screeching to a halt."

Johnson says Ma is a character that reminds her very much of her mother.

"She is one of the first group of professional women who really had to face a man's world and keep their dignity and their self-respect through all the things that were happening that were adverse to that," she said.

"She had to live at one place which was aggressive, direct, uncompromising," Johnson said. "She's alone and she knows she's alone."

All qualities that are not natural to the actor portraying the singer.

"I have to find that place to make it ring true," she said.

Johnson says there are glimpses in the play of Ma Rainey that show her softer side – a certain gentleness about the character that "doesn't stay for very long."

Ma Rainey had a lot of baggage to contend with, says Johnson. She was creating the mold of the famous Black female recording artist. And as they say, it can be lonely at the top.

"Not forgetting that her daily life was White people not looking at her, spitting on her. If she could she would probably beat them up," Johnson says with a laugh. "She also had a masculinity to her that made it so she could battle through the recording world."

But some of the men in Ma's life also knew that she was a commodity, especially Mel the studio owner. She could make him money. Lots of money. More money than even Ma is taking in.

Irvin straddles the line between the Black musicians and the White studio establishment.

"He prides himself on getting along with the Black musicians, but whatever sympathy he has, and whatever feelings he has, in society, he can only take that so far," says Epstein. "He can't pal around with these guys, he can't, whether he wants to or not, I'm not really sure. He's as nice to them as he can be."

Jones says the White studio owners exploit the Jewish culture in order to connect themselves with the Black blues musicians.

"These groups of people would never come together to produce one product if wasn't for this one thing, called the Blues," Jones said.

"Just because you're Black, doesn't mean you speak the language of August Wilson, what he did, beautifully, better than anyone I've ever read, he captured a lexicon, a rhythm, a musicality in the African American language that some of us have actually shunned from or marginalized. And he captured it and embraced it and made it music."

Jones, who has acted in other Wilson plays, including the role of Elder Joseph Barlow in last year's Portland Playhouse production of "Radio Golf," knows the difficulty.

"I did 'The Piano Lesson' and I played the character of Doaker, and I had a 20-minute monologue, it's all about the piano," Jones said. "It's 20 minutes. Now that's nothing compared to some shows, like a one-act play, and I've done one-act plays and I gotta tell you, the 20-minute monologue was harder because it was roundabout, non-sequitors, things that didn't connect."

With only four weeks to bring the production to stage, Jones said it has definitely put a strain on the cast.

Wrick Jones, who is playing the piano player Toledo for the third time in his career, said Wilson definitely writes in a rhythm that is native to the South. Wrick Jones said he's had to reinvent his character to meet the artistic vision of the director.

"It's a blessing to do any part you can with August Wilson's work," said Wrick Jones. "He writes in a vernacular that is so natural. I can hear all these voices I grew up with."