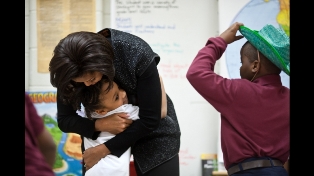 First Lady Michelle Obama hugs a student as she arrives at Burgess-Peterson Academy in Atlanta, Ga., Feb. 9. Obama visited the school to highlight how it is working with children to promote healthy eating, bringing the principles of "Let's Move!" to life through gardening and healthy eating programs. (Official White House Photo by Lawrence Jackson)

The first lady has signed with the Crown Publishing Group for a book about the garden she started on the South Lawn of the White House and the benefits of healthy eating. The book, currently untitled, is scheduled to come out in April 2012. Obama received no advance and will donate all proceeds to a charity or charities to be determined.

The White House said the garden has yielded more than 2,000 pounds of fresh fruits and vegetables.

"We've gotten food out of the garden, and we can eat it and it's good," Obama said Wednesday during a brief telephone interview with The Associated Press. "So we wanted to share the story with the rest of the nation and perhaps with the rest of the world, because we get so many questions about the garden: How did we do it? Why did we do it? How do I do this in my own home or community?"

The first lady, 47, has been an advocate for locally grown food and last year started an anti-obesity campaign, "Let's Move!" According to Crown, the book will be "inspirational and instructive, and will provide ideas and resources for readers to get involved in the movement to create community, school and urban gardens, support local farmers' markets, and make small lifestyle changes to achieve big health results.

"Mrs. Obama will also share some of her family's favorite healthy recipes."

Editions will include an illustrated hardcover, an e-book and an "enhanced" multimedia e-book.

"I hope it will be a beautiful book, as well, something that everyone can take something away from," Obama said. "Maybe if you're a local gardener yourself, you'll be drawn by the pictures of the ... garden in its various stages throughout the seasons. If you're a kid, maybe you'll pick up the book and read along with your teachers, and look at how we've incorporated young people in our garden."

Obama is continuing a tradition of first ladies using books to address a favorite cause. Hillary Clinton had a best-seller with "It Takes a Village," about the importance of community in raising children; and Laura Bush collaborated with daughter Jenna on a picture book about a reluctant reader, the popular "Read All About It!" This is Michelle Obama's first book and she said she had begun working on it. "I don't know why I'm not really nervous about it. Maybe I don't know enough to be nervous yet," she said.

Because of her crowded schedule, Obama plans to have help, with details still to be worked out. Assistance might be very close by. President Obama has written two best-sellers, "Dreams From My Father" and "The Audacity of Hope," and is widely regarded as among the most literary presidents. Both books sold in the millions.

The first lady, who spoke before a Wednesday afternoon event at the South Lawn to lay down crops for the spring planting, eventually will face another first lady tradition: memoirs after leaving the White House. Asked about possible other books, Obama said her priority for the moment was on tending her garden.

"We'll see. I'm not really thinking that far ahead," she said. "Today we're going to plant our third season, and we're going to be out on the White House lawn with kids this afternoon. So the focus is really on right now, in telling this story well right now. And we'll sort of see what happens from there."