"To really know about a person, you have to do things that they did, and see the things that they saw. So I listened t the music, and watched performances on YouTube, I walked the streets of Jimi's hometown, Seattle. I read and thought about Jimi, and talked to people who knew him, and I even fingered an electric guitar once or twice...

I thought about how Jimi saw the world and how that differed from other people's views, so I painted Jimi one way and his surroundings another way… This book is about the creative process of an artist… No matter who we are creatively, we all basically follow the same path, but make the process our own and unique to us… All I can say is, Jimi rocks!" 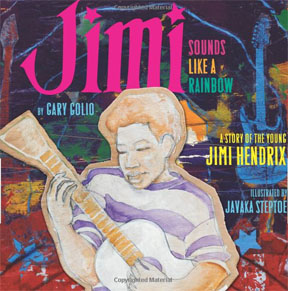 Jimi Hendrix (1942-1970) was a flamboyant rock icon who flamed out instead of fading away due to his also being a substance abuser who dabbled in everything from alcohol to marijuana to amphetamines to hashish to heroin to LSD before succumbing at the tender age of 27 to a combination of red wine and sleeping pills.

Ostensibly enough time has elapsed since his passing that Hendrix can now serve as a role model to children, at least in terms of overcoming childhood adversity, exploring one's creativity and, of course, making beautiful music in "Jimi: Sounds Like a Rainbow."

Thus, he is appropriately the subject of Jimi: Sounds Like a Rainbow, an autobiography designed for 4th though 8th graders which focuses primarily on the legendary guitarist's formative years spent growing up and exploring in Seattle. Faithful factually to what actually transpired in Jimi's life, the book touches on such significant milestones as his acquiring his first ukulele, guitar and, later, electric guitar.

Hey, if these authors figured out how to put a positive spin on the Woodstock Nation's fondness for hallucinogens, who knows what's next? Maybe a graphic pop-up book aimed at kindergarteners about the Hip-Hop Generation's East Coast-West Coast turf war featuring bios of Biggie and Tupac.

Excuse me while I kiss the sky.