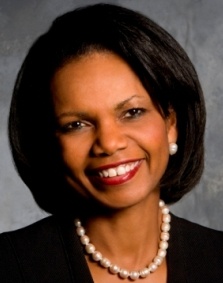 "John and Angelena Rice were extraordinary, ordinary people. They were middle-class folks who loved God, family, and their country. I don't think they ever read a book on parenting. They were just good at it…
They built a world together that wove the fibers of our life into a seamless tapestry of high expectations and unconditional love. And somehow they raised their little girl in Jim Crow Birmingham to believe that even if she couldn't have a hamburger at the Woolworth's lunch counter, she could be President of the United States…
Good parents are a blessing. Mine were determined to give me a chance to live a unique and happy life. In that they succeeded, and that is why every night I begin my prayers saying, 'Lord, I can never thank you enough for the parents you gave me.'"
Given all that Condoleezza Rice went on to accomplish in life, it's hard to believe that she was born in Birmingham, Alabama in the Fifties during the repressive reign of Jim Crow segregation. But somehow, despite spending her formative years in a city where state-sanctioned discrimination served to frustrate the aspirations of most other African-Americans, she miraculously managed to overachieve with the help of doting parents blessed with the sense to recognize their gifted daughter's great potential and to nourish her dreams the best they could.
The former secretary of State pays tribute to that herculean effort in "Extraordinary, Ordinary People," a remarkably-revealing memoir by a very private, public figure who has to this juncture in life played her cards pretty close to the vest. But you had a sense something might be up when she recently played piano behind Aretha at a concert in Philadelphia. And after reading this intimate autobiography it's clear that underneath that seemingly-steely veneer beats the heart is an introspective sister who's yearning to recognize her roots.
For in unusually-vulnerable, and disarmingly soul-baring style, she discusses everything from what type of man she's looking for ("I'd always hoped to marry within my race.") to her fear of being rendered barren by a surgical procedure for uterine fibroids to being an intellectually-curious child prodigy. She also tackles head-on a variety of controversial questions often debated within the black community, like social status based on skin color, and whether the primary beneficiary of desegregation has been a black bourgeoisie which had barely participated in the Civil Rights Movement.
However, it is her reflections on traumatizing childhood experiences in Birmingham in the Sixties which prove to be the most compelling. For instance, she recalls how her dad and other armed men routinely patrolled the neighborhood to keep the Klu Klux Klan at bay.
Sadly, they were ultimately unsuccessful that fateful day in 1963 on which four little girls attending Sunday school were killed by a bomb planted by racists in an unspeakable act she refers to as "homegrown terrorism." Then nine year-old Condoleezza was attending services at a nearby church at the time. Here, she describes not only what it was like to feel the shock waves from the blast, but also to witness the widespread grief and fear which gripped so many folks during the aftermath.
In sum, an evocative opus fully humanizing a once-inscrutable Madam Secretary. I just have one question: May I call you Condi at the homecoming party?

A Memoir of Family