Hendrix: A Look at the Man We Never Knew 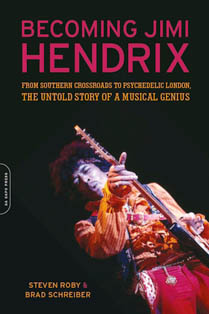 The work compiles facts and interviews covering Hendrix' childhood and the years before his breakthrough as a rock superstar, plus 25 rare photos of the music great's career. Hendrix died of an overdose of prescription sleeping pills and wine in London, Sept. 18, 1970, at the age of 27.

As a father, a military veteran and a lunch-counter protester in the South, so much of Hendrix's short life has been largely overlooked until now. The Skanner News spoke with Schreiber this week, in advance of the authors' appearance at Powell's Books on Hawthorne Boulevard, Thursday, Sept. 23 at 7:30 p.m.


The Skanner News: Jimi Hendrix is one of the few people who are transformative for a lot of people all over the world. What has doing this work with the historian meant for you on a personal level? Did any of this information make you start looking at Jimi Hendrix differently, or our country differently, or the art differently?


Schreiber: There are a lot of new revelations in "Becoming Jimi Hendrix." Most people don't know that Jimi and his band mate and army mate Billy Cox were arrested in December of 1962 at a civil rights demonstration in downtown Nashville. They purposely got arrested at a segregated lunch counter.

Most people don't know that the first time Jimi Hendrix set his guitar on fire was not at the Monterey Pop festival, it was three years before in 1964 when he was touring the South, and he was so poor that he only had one guitar. He set it on fire and then he'd run it backstage and smother out the fire with a blanket so he could do it again the next day. And the quote we got from Bobby Womack, the great guitarist who was on that tour, he turned to Jimi one night and said, "Man, your guitar looks like barbeque."

We learned a lot about Jimi's early life in Seattle, and how racism shaped his world view. And in particular the two women – one Black, one White – who helped him survive when he was split between Harlem and Greenwich Village in New York just before his big breakthrough in 1966.

There were a lot of other really interesting relationships – some minor, some major – that we tried to emphasize, including Little Richard, his sexual attraction to Jimi, his resentment of Jimi's stealing the spotlight from him, and his excessive control over the way Jimi behaved and dressed while onstage.


TS: Brad for us, this is a local story because we have an edition of our paper in Seattle. And it's been weird for me as a lifelong Hendrix fan to find out more about what happened with his family, and his stepsister who now controls the estate and the money and stuff like that. It makes me want to ask about those early years and about the role that his father played. We've all been watching what happened with Michael Jackson and his father, the impact that his father had on his life. How would you characterize Jimi Hendrix' dad, and his family life.

Schreiber: His mother died when she was 33 and Jimi was not quite a teenager, and it had a profound effect on him. Even though his mother was a very heavy drinker, and without being unduly harsh

was fairly promiscuous, she was a very beautiful woman and he idealized her. He comes out in some of his most poignant songs like the song "Angel," and "Little Wing."

The fact is that the Hendrixes were extremely poor, that when Al took over raising Jimi he relied on other families in the neighborhood to help take care of the kids, who sometimes went door to door to the neighbors asking for food. Jimi was a loner, and he was picked on for his obsessive feelings for the guitar. I think there was a heartbreaking image of Jimi's childhood that we talk of in the prologue of "Becoming Jimi Hendrix," that he took a broom to elementary school and pretended to play it before he could actually have a guitar. And a teacher told Al, this child needs desperately to have an instrument, he is going through a psychological trauma, and finally Al did buy him his first guitar for $5.

For the rest of his life Jimi was inseparable from his instrument — he slept with a guitar when he was in the 181st Airborne, he got thrown off tour buses and fired from bands sometimes for constantly playing without letting other guys on the tour sleep. He was truly obsessive, but the positive side of it is he worked harder than almost anyone to become a master of his instrument. I think his natural born genius coupled with how incredibly hard he worked, made him the phenomenal talent that we know.

He transcended psychedelia. He was steeped in blues music when he was in Seattle, he played with the masters of R & B in his youth including B.B. and Albert King, Albert Collins, Curtis Mayfield. Obviously we know what he did with psychedelia, but he was playing with jazz greats, he was jamming with Miles Davis, John McLoughlin, Traffic, Rahsaan Roland Kirk, some of these amazing jazz-rock and jazz guys, when he died. His evolution is amazing and I think his ability to transcend one genre also makes him one of the great guitarists of all time. 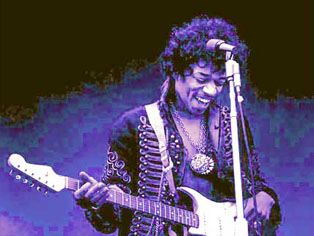 Don't forget that Jimi did not know how to write music, yet he could flip a left-handed guitar over and play it right handed without changing the strings. He didn't know how to note take, but when he was in the studio would instruct other players and give them guidelines like, I need this section to sound like the wind, or this part here, it sounds like the color purple. These are actual instructions he gave other players because he couldn't actually cite the note, and yet he could play anything from memory instantly after hearing it, so he had a very particular gift. The sounds that he derives from guitar, while other guitarists could imitate it pretty well, it was almost alchemical what he could do with a guitar in front of a live audience.

Order a copy from The Skanner Store: Books, Movies and Music