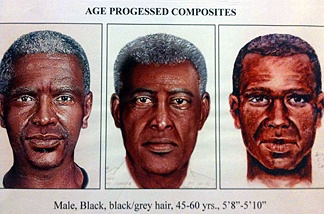 LOS ANGELES — Los Angeles authorities have identified a man arrested in the city's "Grim Sleeper" serial killings.
Los Angeles County District Attorney Steve Cooley says Lonnie Franklin Jr. will be charged Wednesday with 10 counts of murder, one count of attempted murder and special circumstance allegations that could make Franklin eligible for the death penalty if convicted.
Franklin's exact age is unclear, with differing agencies saying he is 51 or 57.
The killings occurred between 1985 and 2007.
___
Associated Press Writer Greg Risling contributed to this report.
THIS IS A BREAKING NEWS UPDATE. Check back soon for further information. AP's earlier story is below.
LOS ANGELES (AP) — Police made an arrest Wednesday in the "Grim Sleeper" serial killings in which a man is believed to have killed 11 people since 1985, a law enforcement official said.
The official, who was not authorized to speak publicly and asked to remain anonymous, told The Associated Press the arrest was made but did not immediately provide a name or other details.
"Today is a good day," Donnell Alexander, the brother of victim Monique Alexander, said as he watched police activity outside the South Los Angeles house where the arrest was made.
Detectives have spent years probing at least 11 slayings between 1985 and 2007 in which the killer targeted young black women and one man.
The killer was dubbed the "Grim Sleeper" because he apparently took a 14-year hiatus in his crimes.
Dozens of police officials closed off a block around the 81st Street house where the arrest was made.
Neighbors described the man who lives there as friendly and quiet. They said he was often seen working on cars in his front yard and would sometimes stop to chat with passers-by.
Neighbor Brenda Locker, a retired city employee, said the man used to work for the city as a mechanic at the 77th Street police station and had retired.
Alexander joined a crowd at the end of the block where the distinctive green house is located. A mobile command post was parked out front, and a line of police tents sheltered tables in the front yard.
Alexander said he always kept faith there would be an arrest.
"You don't think about it every day, but every birthday, every holiday, every Christmas," he said. "It's not closure but it helps."
Neighbors were in disbelief.
"He's a very good guy. I don't believe it," nearby resident Andre Wynn said.
The "Grim Sleeper" case has dogged police even though they had the killer's DNA, a description from a survivor and had offered a $500,000 reward.
The victims were shot, strangled or both, usually after some kind of sexual contact. Ten victims were women and several were prostitutes.
Police have said it's possible the male victim, Thomas Steele, who was shot in 1987, was a friend of another victim or discovered the killer's identity.
All the bodies were found outdoors, often in alleys a few miles south of downtown Los Angeles.
The initial killings occurred during a time of extreme violence in parts of Los Angeles, when many young women were falling prey to crack cocaine and other drug addictions. As many as 30 detectives investigated the slayings in the 1980s but exhausted leads within a few years.
A special squad of detectives was assembled after the most recent known "Grim Sleeper" killing, the June 2007 shooting of Janecia Peters, 25, whose body was found in a trash bin.
The detectives have been focusing on the January 1987 slaying of Barbara Ware, a 23-year-old with a history of prostitution who was found shot in a South Los Angeles alley.
A man called police to report seeing her body being dumped from a blue-and-white van. Within an hour police had used the license plates to locate the van at its registered address at a church. The van's engine was still warm and there were several congregants in the church, but none seemed to know anything. The trail stopped there.
In 2009, police released a recording of the emergency telephone call in hopes someone would know the voice of the man.
"I'd like to report a murder — a dead body or something," the caller said. "He threw her out ... the only thing you can see out is her feet."
The caller then declined to identify himself, saying, "I know too many people." He then hung up.
The one suspect description came from a woman who was sexually assaulted then shot and survived. She said a man with chiseled features and a black polo shirt who was driving an orange Ford Pinto offered her a ride to her sister's house.
She said they exchanged banter and shortly after getting into the car, she was attacked and pushed from the car.
Keisha Smith was among the crowd kept away from the 81st Street investigation scene by police tape. She said the arrested man was well known as a mechanic in the neighborhood and had often helped find parts for her truck.
"It makes me feel scared," she said. "I have three little kids and he was that close to my kids."