Book Review: God and Race in American Politics, by Mark A. Noll 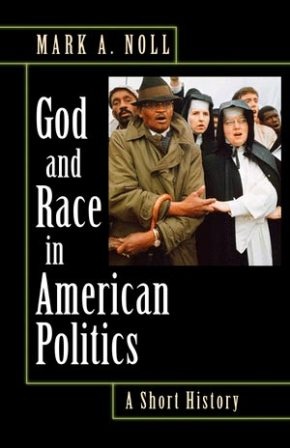 "Together, race and religion make up, not only the nation's deepest and most enduring moral problem, but also its broadest and most enduring political influence. Yet, how race and religion have interacted to shape politics has differed dramatically over time and by community… An earnest moral concern for how governments should conduct themselves, a compulsion to sermonize about the duties of citizens and the state, and a frequent recourse to Scripture for grounding or garnishing political positions have been consistently present in American history...
Before the Civil War, religion drove abolitionist assaults upon slavery even as it undergirded influential defenses of slavery in both the North and the South. After that conflict, Christianity… played a major part in sanctioning systematic white discrimination against African-Americans. In turn, the racially defined polity that religious forces helped to create became a fixed reality of American politics…African-American religion helped spark the civil rights movement… but also keyed a politically conservative countermovement inspired by a different kind of religion.
In other words, rather than any specific configuration of race and religion, it has been the general interweaving of race with religion, along with a discernibly religious mode of public argument, that have pervaded the nation's political history""
-- Excerpted from the Introduction (pgs. 1-2)

During the tempestuous decades leading up to the Civil War, both plantation owners and abolitionists relied primarily on Christianity to rationalize their diametrically-opposed positions on slavery. As the debate intensified, you had firebrands like Nat Turner and John Brown using the Bible as inspiration for insurrections. Meanwhile, self-righteous slave owners forced their slaves to memorize passages from catechisms based on a perverted interpretation of the Good Book.
For instance, African-Americans were expected to recite the following blasphemous responses to questions posed by their white ministers: "Q: Who gave you a master and a mistress? A: God gave them to me. Q: Who says I must obey them? A: God says I must. Q: What makes you lazy? A: My wicked heart. Q: What book tells you these things? A: The Bible."
Given that religion served such different functions for the Founding Fathers and the slaves upon whose backs this nation was built, is it any wonder that it has continued to divide the country along color lines? As Don King would say, "Only in America!" Let's face it, blacks and whites in general have very different sets of Christian beliefs, which explains why Sunday morning at 11 continues to be the most segregated hour in the United States.
This fact was never more graphically illustrated than during the last Presidential campaign when then candidate Barack Obama had the good sense to throw the minister who had married him and baptized his children under the bus, rather than risk alienating the white majority shock by Reverend Wright's sermons. Yet, not much was made in the press of Steven Anderson, a White minister who was leading his lily-white congregation in prayer for Obama's death.
God and Race in American Politics is an eye-opening book by Mark Noll which points out how again and again, from generation to generation, Christianity has been the most effective political tool employed by both the left and the right to appropriate the moral high ground. Which side is really right or who God would agree with is less the author's focus here than his argument that the dependency on religion to legitimate political positions is a peculiarly American phenomenon.
A most curious, enduring state of affairs in a nation supposedly based on the separation of church and state.