Grace After Midnight: Snoop Pearson of the Wire 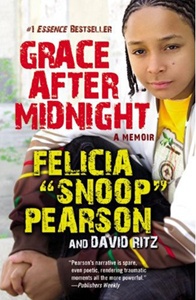 By the time Felicia "Snoop" Pearson was 15, she was serving hard time for a murder she says happened in self-defense. But now, the woman that was born a "three-pound, cross-eyed crack baby in East Baltimore," is famous for starring as a cold-blooded villain on the critically acclaimed HBO series "The Wire."
In her new memoir, "Grace After Midnight" Pearson talks about life in one of the most dangerous cities in America. Pearson's struggle was one against authority that involved drug dealing to support herself and violence to defend herself.
After being set on a path that didn't involve prison or death, she was discovered in a nightclub by Michael K. Williams of "The Wire."