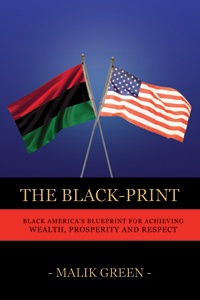 In author Malik Green's new book, "The Black-print," the former crack addict and veteran spells out a way for wealth, prosperity and respect for African Americans. Despite 50 years or what Green skeptically calls progress, the Black community contuse to face a myriad of obstacles. African Americans are struggling to gain true equality, prosperity and respect here in America. Green's "Black-print" contains radical and bold solutions, spelled out in a detailed plan, that attempts to address the problems that afflict the descendants of African slaves and raise them to a level unprecedented in the United States.


Green was born in Harlem and raised on the Lower East Side of New York City in the late 1950s. He says he's always had a joy in being Black, and was always interested in his ethnicity, politics and God. Green dropped out of school at the age of 17 and joined the U.S. military. After returning to New York City, he abused crack-cocaine for two years before he "was able to free himself from that menacing demon." He has independently studied history, politics, business and religion for many years.