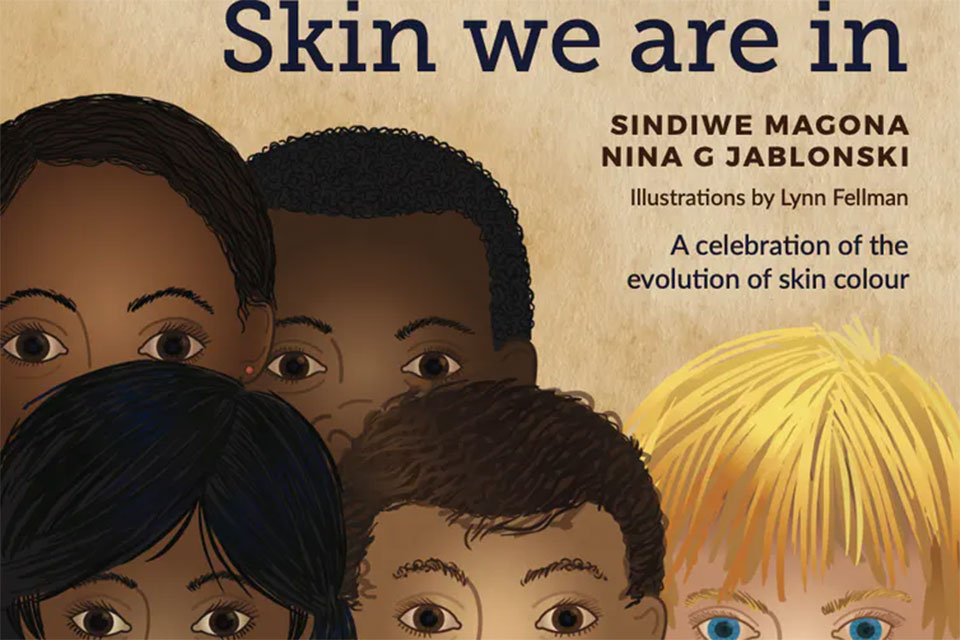 Nina Jablonski: As someone who studies the human biological past, I had been writing about skin colour and race for academic journals and for adult readers for years. The idea of doing a children’s book was planted back in 2010 when a friend impressed on me the importance of writing up my research on skin colour and race as an illustrated book for young readers. Like many South Africans, he realised that skin colour had been transformed through the country’s colonial history from a simple bodily trait – something that covers our bodies – to something that determines human worth and destiny.

I had found, in the course of my work, that people knew its social significance, but they didn’t understand it. Many were convinced that there was a genetic connection between skin colour and other physical and intellectual traits, including intelligence. This information – about how skin colour had evolved and how it didn’t determine any other human traits – really needed to be conveyed to the people who counted most: young people.

But I had no experience in writing for kids and no idea where the story would come from. I had the big challenge of finding a storyteller. I turned to the writer Njabulo Ndebele for advice. He suggested you, Sindiwe, saying “she has the spirit and spine needed”.

Sindiwe Magona: The project scared me for I had never worked with a scientist. But the subject matter is one of the most important aspects of my life as it has been the bane of black life in this country and, indeed, the world. This was a book that could enable parents to broach the subject of skin colour with their children. All parents need help to deal with race and racism; many did not get good grounding as children. Skin colour is often a difficult subject and dealing with it through storytelling is a great aid.

Skin we are in

Nina Jablonski: One of the things that most impressed me, once we were talking, was your ability to express the everyday wear-and-tear of skin colour and colour-based racism.

Sindiwe Magona: Racism in South Africa was a way of life as it was sanctioned. Social stratification, according to skin, was reinforced by apartheid laws that in turn embedded and entrenched poverty and lack of mobility for the oppressed. The darker the skin colour, the less legal protection accorded, to the extent of denial of citizenship. Just as skin colour is inescapable, so was poverty inescapable. This created and reinforced a deep-seated sense of inferiority in most black people while most white people suffered the reverse and felt superior.

Nina Jablonski: You found the hook to start writing the book quite by chance…

Sindiwe Magona: Coming back from our first meeting, Nina, I walked through the gate and reached behind the post for mail. Right there, on the small bush whose leaves I often have to brush aside to look into the mailbox, sat a chameleon. I watched as it slowly made its way from the stalk onto a leaf … changing colour as it did. At once, I morphed into a child, a boy, and I envied the chameleon’s ability. If only I could do that. Strange thing is – never before and never since have I spied another in my garden.

Nina Jablonski: When you told me about Njabulo, who longed to change his colour, I knew we had a great story. From there, we worked step by step, fitting the science alongside the developing text. We began working with Lynn Fellman, the illustrator, to create the look of the characters and their setting…

Sindiwe Magona: Enter Uncle Joshua and a group of children – Njabulo, Aisha, Tim, Chris and Roshni. Given a recycling project, Njabulo offers his Uncle Joshua’s junkyard, where the group from a multiracial school should meet. Njabulo, waiting for his group, is suddenly assailed by misgivings. Will his “friends” find him wanting? Are they, indeed, his friends? That is when he comes across the chameleon and wishes they were all the same colour … or if one could change colour like the chameleon. Uncle Joshua is stricken by the realisation of the self-doubt that is the lot of the black child. Later, he gets the group talking about skin colour; and here Nina’s science comes in very handy. With understanding grows self acceptance and appreciation. The result is the song that the group presents with the instruments they make using bits and pieces from the scrap yard.

Nina Jablonski: Uncle Joshua was a believable and trusted wise uncle, who talked to the kids about things like the effects of sunlight on the body and how people got it wrong when they equated skin colour with intellectual potential. The science content boxes on each page provided basic facts backing up what Uncle Joshua was saying. The characters are very true, I don’t know how you do it.

Sindiwe Magona: I am fortunate that I never discarded my childhood, or perhaps it never left me. This enables me to go into that world of the child, imagine its delights, its fears, its doubts, and the absolute thrill of discovery, of mastery.

Where to find the book

Nina Jablonski: We can’t force books into the hands of children, parents and teachers. But we made the book available in all of the official languages of South Africa, and made free copies readily available to schools in the Western Cape through Biblionef South Africa. We are incredibly fortunate that we had support from the businessman Koos Bekker through the Babylonstoren Foundation to make these things possible.

Sindiwe Magona: All parents are challenged by the issue of race and racism. White parents often feel “accused” of racism and black parents, by and large, feel since they are at the receiving end of racism, it is the other side that should learn. If white people would just stop being racist then the problem would be no more. Were it that simple.

We all need to forgive ourselves and one another

… so we can go on and own our past and what it dealt us and then rid ourselves of beliefs we have come to know or recognise as unfounded. From there, we might be able to hand over a cleaner, wiser belief system to our children.