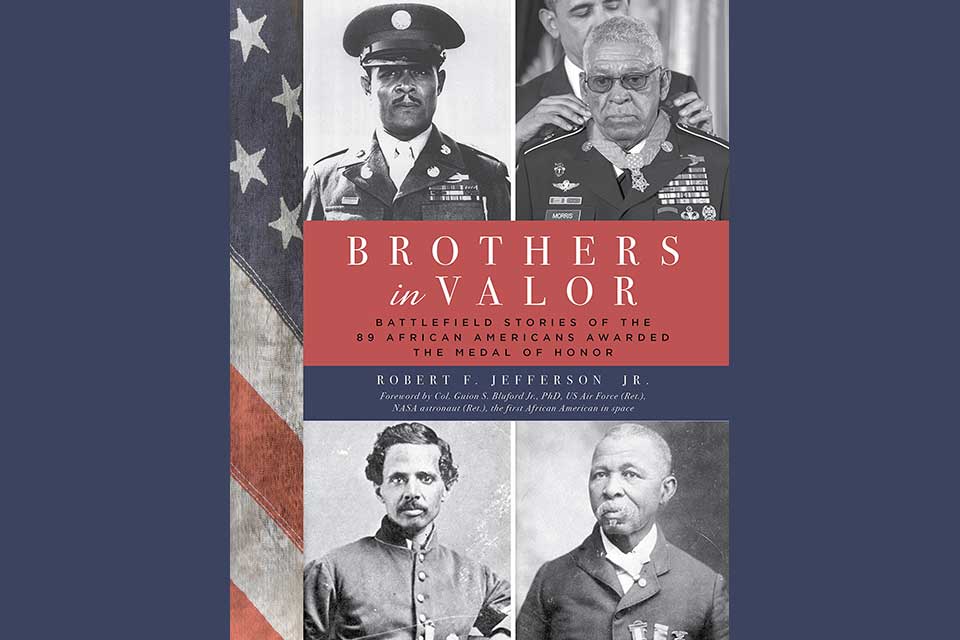 Since the American Civil War, scores of African Americans have served with great distinction. Through thousands of historical accounts, photographs, and documentary evidence, the book introduces the 89 Black soldiers who continued forward when all odds were against them.

During the Battle of Fort Wagner in 1863, Sgt. William Harvey Carney picked up the fallen flag from his lifeless comrade. He waved the flag for all of the 54th Massachusetts Volunteer Infantry to see and led the way to the parapet to plant the colors. After Col. Robert Gould Shaw was mortally wounded, Carney inspired his infantry forward. Even after sustaining severe wounds, Carney proudly declared, “Boys, the old flag never touched the ground!” After this battle, Carney became the first African American to receive the Medal of Honor.

The book's publisher Lyons Press says "Dr. Jefferson paints a vivid portrait of African-American soldiers who carried the flag of freedom and how they reshaped the very definition of courage under fire during some of the most harrowing moments in United States military history. In turn, their courage and determination left an indelible mark on the American portrait."

Ret. General and NBC News National Security Commentator Barry McCaffrey, said “Brothers in Valor is a superb history of the 89 courageous African-American Servicemen who were awarded the Medal of Honor from the bloody Civil War to the bitter struggles of Vietnam. These stories chronicle courage ‘above and beyond the call of duty.’ Dr. Jefferson’s beautifully researched book is not just a spellbinding tale of unbelievable acts of courage, but also explores the reality of soldiers who struggled against an enemy on two fronts. The racial injustice of America’s past was incredible and cruel. These brave men had to face the storm of battle and also fight to be recognized as patriots, heroes, and leaders.

"America has unfinished business in the struggle for equality.”

"This exciting work is about more than combat, however," said Dr. Barton A. Myers, Associate Professor of Civil War History, Washington and Lee University. "It is an important examination of what the battlefield experiences of these men came to mean as a nation struggled its way toward greater equality and through a debate over how to define honor and valor on the field of battle. Ultimately, the exceptional courage harnessed by this intrepid group of black soldiers championed the cause of citizenship, freedom, and the civil rights for every American."