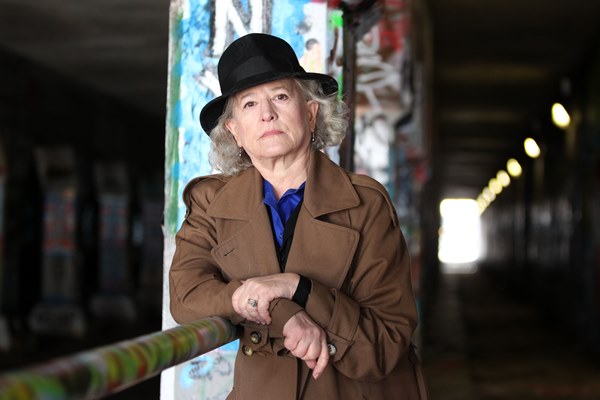 NEW YORK (AP) — In "Underground Airlines," an upcoming novel by Ben Winters, a Black bounty hunter rides through a poor neighborhood in Indianapolis alongside a white policeman.

"As we crossed Broad Ripple Avenue," Winters writes, "we passed a small knot of black kids, laughing and walking together on the narrow sidewalk; one of them, a short kid pushing a bike, wore a hoodie pulled low over his eyes. Cook slowed down and gave a blurp of the siren, gestured at the kid to make sure his face was showing. I caught the kid in the mirror with his middle finger aloft, a miniature of impotent rage frozen in the side-view as we drove away."

Winters could imagine the scene simply by following the news. The wave of police killings that helped launch the Black Lives Matter movement is also influencing a genre that captured tensions between police and non-white communities well before the rise of social media and cellphone videos. Publishers and writers say that story lines known to readers of Gary Phillips or Walter Mosley or Eleanor Taylor Bland will likely become more common and intense.

"When you're writing a book, you're not in an isolation chamber," said Winters, who in "Underground Airlines" depicts slavery still being legal in the U.S.

"This particular issue has long and faithfully been represented in crime fiction," said Joshua Kendall, editor-in-chief of the crime fiction imprint Mulholland Books, Winters' publisher. "It's simply that much of the fiction has been overlooked, just as the actual rate of abuse overlooked by media until now. That said, we need and want more fiction about it. The curiosity, concern and appetite seem to have finally grown."

David Baldacci's novel "The Last Mile," scheduled for April, tells of a black man on death row and the likelihood he was wrongly convicted. Mosley, best known for "Devil in the Blue Dress" and other novels featuring the black detective Easy Rawlins, says he has been working on a book about a former New York City policeman investigating the shooting of two officers by a black man and learning that the officers had tried to kill the man first.

"In the end he realizes that he has to come to some kind of understanding about how the system works, that his own sense of law and justice is never going to work for him," says Mosley, who is calling the novel "Detective, Heal Thyself."

Louise Penny's "The Great Reckoning," coming out in August, focuses on a corrupt police academy in Quebec and how trainees absorb a hostile mentality toward non-whites. In one passage, a white cadet confronts a black woman, Myrna Landers, and glares at her as he tells her not to advance any further.

"Myrna Landers had seen that look many times," Penny writes. "When stopped for traffic tickets. While walking in civil rights marches through Montreal. She'd seen it in reports of riots and police shootings. She'd seen it in color and in black and white. In recent news reports and in old newsreels. And archival photographs. Of the deep South. And the enlightened North."

But crime fiction is no more diverse than much of the book world and, at least in the near future, many narratives that take on race will likely come from white authors such as Baldacci, Winters and Trudy Nan Boyce. Kendall is trying to change that. He has agreed to a multibook deal with Attica Locke and says he is looking to sign up other black writers.

Phillips, who set his 1994 novel "Violent Spring" in the aftermath of the Los Angeles police beating of Rodney King, said he was hoping that such younger authors as Aaron Philip Clark and Desiree Zamorano would tell stories reflecting more recent events.

"The old days of the PI with just a file and an address and a sexy secretary are long dead," said the 60-year-old author. "Back in the 1980s and '90s writers like me and Walter Mosley and Paula Woods pushed the envelope forward and looked at different issues. I think the younger folks will do even better pushing it forward more. You have writers in this field who are going to be able to use things like Ferguson and what's happening on college campuses."

"Everyone knows of Walter Mosley, and there have been other excellent black crime writers published in recent years, such as Paula Woods," says Mark Tavani, vice president and executive editor of G.P. Putnam's Sons. "But in my experience these writers are a small percentage of those I see. As the larger discussion about race and justice engages more people, I can see that changing."

Boyce is a former Atlanta police officer whose debut novel, "Out of the Blues," came out last month. She said she is currently working on a book about the murder of students at Spelman College, a prominent black liberal arts school in Atlanta, and the protests that follow when the suspects are not identified. Boyce added that the new novel, currently untitled, was inspired in part by the shooting of Michael Brown in Ferguson, Missouri.

"As in many cases where there's a violent confrontation between the police and citizens, that incident did not begin with the encounter between the officer (Darren Wilson) and Mr. Brown. That incident had its roots in the systemic racism and the legacy of slavery that survives today," she said.

"So the next novel I have written has an even stronger thread exploring some of the issues between the police in Atlanta and citizens who are confronting a justice system that they do not trust."