Book Review: More Than A Score 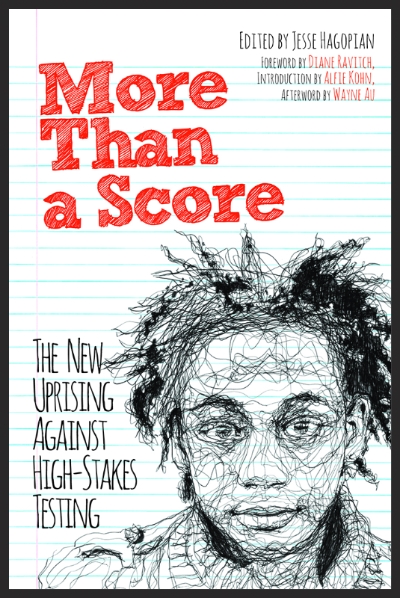 More Than a Score

“As the essays in this book make clear, public education is under attack. So is the teaching profession… Those who are leading the charge are very wealthy individuals, hedge fund managers, corporate executives, and venture philanthropists.

The attack on public schools and the teaching profession is fueled by a zealous belief in test scores… Reformers treat standardized tests as both a measure of quality and the goal of schooling. They don’t care that their fetishizing of tests has perverse consequences, that it leads to narrowing of the curriculum, cheating, teaching to the test, and gaming the system.
Reformers don’t care that their focus on scores as the be-all and end-all of schooling has warped education, particularly in districts where children have the highest needs and the lowest scores. Test-prep is all-important; it leaves no time for projects, activities, and deep learning.”
Excerpted from the Foreword (pages xi-xii)

The size of America’s Prison-Industrial Complex increased exponentially towards the end of the 20th Century, when big business successfully lobbied politicians to privatize correctional facilities all across the country. Unfortunately, while Wall St. benefited immeasurably from the conversions, minority youth were the primary victims of the subsequent rush to fill all the new jails via the kindergarten to prison pipeline.
More recently, investors started setting their sights on the nation’s public schools, again with the idea of profiting at the expense of the poor. President George W. Bush’s much-ballyhooed “No Child Left Behind” policy was ostensibly little more than a thinly-veiled attempt by entrepreneurs to wrest control of public education from the federal government.
The capitalist reformers’ basic argument was that failing schools could be turned around if they were run more like streamlined businesses than academic institutions, and that the best way to gauge how well one was doing was by looking at students’ scores on standardized tests. To the extent that bureaucrats swallowed that sales pitch, teachers and principals found their jobs in jeopardy as they attempted to adjust to the altered curricula.
The fallout has already been shocking in cities like Atlanta, where numerous staff members are headed to prison for falsifying grades to protect their salaries as well as bonuses tied to test results. Elsewhere, we find faculty and pupils pushing back against the pressure to focus so narrowly on standardized tests and against the suggestion that scores are the most reliable way of assessing the quality of an education.
All of the above is the subject of More Than a Score, a collection of thought-provoking essays edited by high school history teacher Jesse Hagopian. The book includes articles not only by Jesse and fellow educators, but also by students, parents and administrators invariably questioning the wisdom of widespread standardized testing.
A clarion call by an army of passionate child advocates coming to the defense of kids caught in the crosshairs of the corporate-promoted practice of teaching to the test.