Undivided: The Story of A Christian Mother and her Muslim Daughter 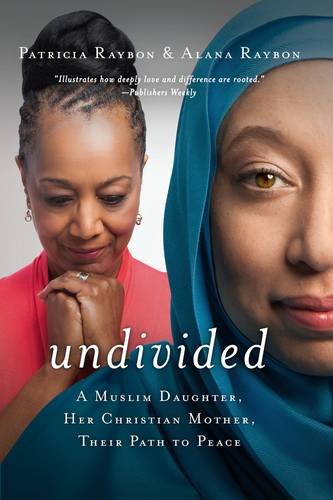 Book review by Kam Williams: Undivided: A Muslim Daughter, Her Christian Mother, Their Path to Peace by Patricia Raybon and Alana Raybon

“They didn’t talk. Not for 10 years… Instead, a mother and daughter tiptoed with pain around the deepest gulf in their lives—the daughter’s choice to leave the church, convert to Islam, and become a practicing Muslim.

Undivided is a real-time story of healing and understanding… as they struggle to learn how to love each other in a whole new way… Undivided is also an up-close and personal look at the life of a Muslim convert—at a time when attitudes are mixed about Muslims.”

-- Excerpted from the back cover

Alana Raybon was raised in a tight-knit, Colorado community where she and everybody she knew were Christians. And when she went off to college, her parents thought they had no reason to worry about their daughter’s faith, since she would be pursuing a joint degree in a program co-sponsored by Alvin Ailey at Fordham University, a Catholic school.

But it was in New York City as a freshman that Alana abandoned her lifelong love of dance in favor of surrendering to the tenets of Islam. As she explains it, “I felt empty inside.” And while you or I could probably satisfy that hunger with a burger and fries, hers was a soul thirst for the deeper meaning of life that would only be quenched by studying both the Bible and the Quran, reading the autobiographies of Gandhi and Malcolm X, and attending Sunday School as well as services at a storefront mosque in Manhattan.

Alana emerged from the information overload a Muslim, a development that didn’t sit well with her devout Christian mother, to say the least. Pained, Patricia initially blamed herself, wondering, “Maybe I didn’t pray enough. Or take Alana to church enough. Or care enough. Or love enough.”

The two had a falling out that would last a decade. Eventually, Patricia got over her anger and feelings of rejection when she finally woke up to the fact that God wouldn’t want her to remain estranged from her own flesh and blood.

The pair’s tempestuous path from alienation to reconciliation is the subject of Undivided: A Muslim Daughter, Her Christian Mother, Their Path to Peace, a co-authored memoir offering hope that Christianity and Islam can peacefully coexist, a much-needed message in these very divided times.

After all, Mahatma Gandhi once said that “Peace between countries must rest on the solid foundation of love between individuals,” making an analogy perhaps more appropriately applied today to religions, given the borderless new world order which has folks more passionate about faith than citizenship. And, as Patricia concludes, “I knew that things must change. Mothers can’t be angry at daughters.”

An inspirational autobiography alluding to another sage, age-old maxim, namely, “Let there be peace on Earth, and let it begin with me.”

To order a copy of Undivided, visit: http://www.amazon.com