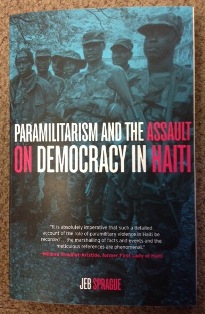 According to a Feb. 28 NPR story, of the $9.3 billion pledged for Haiti earthquake relief, only $2.5 billion materialized into some form of humanitarian aid. Of that, only about seven percent actually made it to the Haitian people.

The two main reasons potential donors have pulled funds are a lack of trust in the Haitian government and an unpredictable, dangerous situation on the ground.

Sociologist Jeb Sprague looks into the context behind these reports, and specifically the re-emergence of the infamous Tonton Macoutes, in his new book: "Paramilitarism and the Assault on Democracy in Haiti."

"If there's one underlying argument I make in the book, it's that impunity and political violence in the country has been overwhelmingly the result of the actions of dominant elite groups," he says. "Whereas previously a cold war dictatorship ruled the country through a permanent paramilitary apparatus and with U.S. support, nowadays it's become a more nuanced process where paramilitaries come in and out of deployment but they're still there."

The book arose from Sprague's research in Haiti and his engagement with the poor majority following the 2004 military coup. Interviewing a cross-section of local activists and grassroots human rights organizers, he was particularly inspired by Lovinsky Pierre Antoine.

Pierre Antoine, a major figure in Haiti's grassroots human rights movement, "disappeared" in 2007. "Disappearing," according to Sprague, is a euphemism used to describe when someone is captured by criminal and/or paramilitary group and is taken and killed somewhere and never found again. Pierre Antoine has not been found to this date and Amnesty International has taken up his case.

In his book, Sprague argues that the violent targeting of the poor majority dates back to the arrival of Christopher Columbus. He details how Haiti's indigenous people were almost completely wiped out within 50 years of Columbus's arrival to the island of Hispanola in 1492, through genocidal violence, forced labor, and the spread of diseases that their immune systems weren't prepared for.

This legacy of resistance continued into the Haitian Revolution, the most successful slave rebellion in history where the enslaved managed to take over the government from colonial powers and founded their own independent republic.

Following the revolution, a struggle for power occurred between those who wanted to produce for foreign markets and those that wanted to focus on domestic issues. The former won out and cut a deal with the French monarchy, essentially agreeing to pay for France to recognize their independence and not blockade the state.

The combination of local elite power struggles and the payments to France had a major role in crippling the country, says Sprague.

He says much of this time was characterized by the propping up of a privileged minority at the expense of the poor majority. The U.S. became the country's largest trading partner, increasingly intervening in its affairs and even occupying the country from 1915-1934.

Haiti wasn't immune to Cold War tensions and this resulted in a permanent paramilitary presence. Sprague breaks down the contemporary history of paramilitarism in the country into four waves: the Tonton Macoutes, the attaches, the FRAPH and the FLRN, the focus of his book.

"These are basically different names over the years but common threads, individuals, financers remain throughout." he says.

The Macoutes were a permanent part of Haitian strata, with tens of thousands of people involved, according to Sprague. They were institutionalized by the government, most famously under the regime of Jean Claude "Baby Doc" Duvalier, in various neighborhoods with two to three stations with anywhere from dozens to up to 100 people who could be called upon. When they transitioned into the attaches in the mid-80s, they stopped wearing traditional blue uniforms and dawned civilian uniforms. The attaches were forced to go underground following the rise of a democratic movement in 1991 that saw the people taking paramilitary members to court. However, later that year, there was a coup that resulted in the overthrow of President Jean Bertrand Aristide, who Sprague says was the first freely and fairly elected President in the country's history. Many of those convicted in absentia were let off the hook. The paramilitaries re-emerged as the FRAPH and committed massacres to uphold the class system from 1991-94.

In '94, another democracy movement emerged and pushed the FRAPH underground. One of the lasting legacies of this decade long movement was a push to disband the military. This was successful in 1995 but the Haitian people were never able to fully rid their Constitution of the military, which was a motivating factor for the rightwing paramilitary supporters to push back.

"It was clear that this was not a nationalist army, it did not have the purpose of protecting the country from foreign attack, rather it was used as a force to repress the poor." says Sprague. "Haiti wouldn't be able to defend itself against the U.S. in the foreseeable future. If any sort of force was built under this government, it wouldn't be a force like in Cuba or Venezuela."

According to Sprague, the fourth wave of paramilitarism, known as the FLRN, came about after the 2004 military coup that once again, ousted President Aristide. The FLRN was made up of anywhere from a few hundred to a thousand people, mostly ex-military and former Macoutes. 400 of these members were integrated into the Haitian police force, according to Wikileaks.

Sprague points out that Western media sought to discredit Aristide even though he was looked at as a local hero among the country's poor majority.

"They don't talk about the various public works, social programs, education, healthcare projects his government developed while it was under aid embargo, or the campaign demanding reparations from France" he says. "His government lost 32 percent (of its national budget), probably a lot more than that, because of the embargo on aid that the US Chamber of Commerce backed and the Bush administration helped with."

Haiti's largest political party, which Aristide helped to found, Fanmi Lavalas, was controversially barred from Haiti's most recent elections, causing many to deem the results as illegitimate.

Sprague notes that Haiti's current President, Michel Martelly, was a musician who was a supporter of rightwing politicians and coups during what he calls the democracy years. Martelly, following the earthquake, even suggested pardoning "Baby Doc" on charges of corruption and human rights violations.

According to Sprague, the current government and many of the outside forces participating in the recovery mission are approaching Haiti with what author Naomi Klein has termed "disaster capitalism." By this, he means that businesses are profiting from the disaster. Specifically, he points to organizations like the World Bank, other transnational governments and the Interim Haiti Recovery Mission headed by Bill Clinton as groups that are providing subsidies to attract global investors to the country. One example Sprague cites is the mining industry.

"You see the World Bank giving millions of dollars to mining companies to try to set up these mines in the North of the country or they're digging a deep water port and trying to build sweatshops," he says. "With such high unemployment, people need jobs. It's easy to understand why a lot of people would be open to it. But Haiti will be receiving what has been deemed among the lowest mining levies in the world, meaning that local benefits will be very few. Once these finite minerals are gone, they are not coming (back), and it's clear Martelly has pushed through the new mining constitution without congressional oversight or agreement.

"If you looked at some of the policies of the Aristide government, it was a very moderate, reformist government but his very moderate policies were trying to improve conditions for the poor, minimum wage, labor laws, investment in medical infrastructure. Those were heavily opposed by the sweatshop owners and hardline rightwingers who formed the backbone of the political opposition of the country and backers from abroad."

Sprague says the timing of his book is particularly important because there is a push to bring back the military under the new government. Much of the backing for this has come from Brazil, Ecuador and France.

During Mar. 2011, he says he visited a paramilitary/ex-army camp on the outskirts of Port-au-Prince where a few older members were training young recruits on a hill.

"Even though they're not in the streets cracking skulls or carrying out a high number of hit jobs on popular movement leaders, they're still around," says Sprague. "They're still capable of being deployed in the future. Since the 2004 coup, paramilitaries and their backers have achieved total impunity for their crimes against the Haitian people."