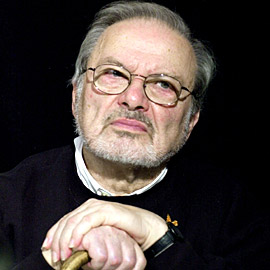 NEW YORK (AP) -- Maurice Sendak didn't think of himself as a children's author, but as an author who told the truth about childhood.

Sendak, who died early Tuesday in Danbury, Conn., at age 83, four days after suffering a stroke, revolutionized children's books and how we think about childhood simply by leaving in what so many writers before had excluded. Dick and Jane were no match for his naughty Max. His kids misbehaved and didn't regret it and in their dreams and nightmares fled to the most unimaginable places. Monstrous creatures were devised from his studio, but no more frightening than the grownups in his stories or the cloud of the Holocaust that darkened his every page.

Rarely was a man so uninterested in being loved so adored. Starting with the Caldecott Medal he received in 1964 for "Where the Wild Things Are," the great parade marched on and on. He received the Hans Christian Anderson award in 1970 and a Laura Ingalls Wilder medal in 1983. President Bill Clinton awarded Sendak a National Medal of the Arts in 1996 and in 2009 President Obama read "Where the Wild Things Are" for the Easter Egg Roll.

Communities attempted to ban him, but his books sold millions of copies and his most curmudgeonly persona became as much a part of his legend as "Where the Wild Things Are," his signature book and a hit movie in 2009. He seemed to act out everyone's fantasy of a nasty old man with a hidden and generous heart. No one granted the privilege could forget his snarly smile, his raspy, unprintable and adorable dismissals of such modern piffle as e-books and publicity tours, his misguided insistence that his life didn't matter.

"I didn't sleep with famous people or movie stars or anything like that. It's a common story: Brooklyn boy grows up and succeeds in his profession, period," he told the AP.

Sendak's other books, standard volumes in so many children's bedrooms, included "Chicken Soup With Rice," "One was Johnny," "Pierre," "Outside Over There" and "Brundibar," a folk tale about two children who need to earn enough money to buy milk for their sick mother.

"This is the closest thing to a perfect child I've ever had," he told the AP.

Besides illustrating his own work, he also provided drawings - sometimes sweet, sometimes nasty - for Else Holmelund Minarik's series "Little Bear," George MacDonald's "The Light Princess" and adaptations of E.T.A Hoffman's "The Nutcracker" and the Brothers Grimm's "King Grisly-Beard." His most recent book that he wrote and illustrated was "Bumble-Army," a naughty pig party which came out in 2011. In recent months, he had said he was working on a project about noses and he endorsed - against his best judgment - Stephen Colbert's "I am a Pole (And So Can You!)", a children's story calculated to offend the master.

Sendak also created costumes for ballets and staged operas, including the Czech opera "Brundibar," which in 2003 he also put on paper with his collaborator and close friend, Pulitzer-winning playwright Tony Kushner. He designed the Pacific Northwest Ballet's "Nutcracker" production that later became a movie shown on television, and he served as producer of various animated TV series based on his illustrations, including "Seven Little Monsters," "George and Martha" and "Little Bear."

None of Sendak's books were memoirs, but all were personal, if only for their celebrations of disobedience and intimations of fear and death and dislocation, sketched in haunting waves of pen and ink. "It's a Jewish way of getting through life," Kushner said last fall. "You acknowledge what is spectacular and beautiful and also you don't close your eyes to the pain and the difficulty."

Revenge helped inspire "Where the Wild Things Are," his canonical tale of the boy Max's mind in flight in a forest of monsters, who just happen to look like some of Sendak's relatives from childhood. "In The Night Kitchen," released in 1971, was a forbidden dance of Laurel and Hardy in aprons and the flash of a boy's genitals, leading to calls for the book to be removed from library shelves.

"It was so fatuous, so incredible, that people would get so exercised by a phallus, a normal appendage to a man and to a boy. It was so cheap and vulgar. Despicable." Sendak said last fall. "It's all changed now. We live in a different country altogether. I will not say an improved version. No."

His stories were less about the kids he knew - never had them, he was happy to say - than the kid he used to be. The son of Polish immigrants, he was born in 1928 in a Jewish neighborhood in Brooklyn. The family didn't have a lot of money and he didn't have a lot of friends besides his brother and sister. He was an outsider at birth, as Christians nearby would remind him, throwing dirt and rocks as he left Hebrew school. The kidnapping and murder of Charles Lindbergh's baby son terrified him for years.

He remembered no special talent - his brother, Jack, was the chosen one. But he absorbed his father's stories and he loved to dream and to create, like the time he and his brother built a model of the 1939 World's Fair out of clay and wax. At the movies, he surrendered to the magic of "Fantasia," and later escaped into "Pinocchio," a guilty pleasure during darkened times. The Nazi cancer was spreading overseas and the U.S. entered the war. Sendak's brother joined the military, relatives overseas were captured and killed. Storytelling, after the Holocaust, became something more than play.

"It forced me to take children to a level that I thought was more honest than most people did," he says. "Because if life is so critical, if Anne Frank could die, if my friend could die, children were as vulnerable as adults, and that gave me a secret purpose to my work, to make them live. Because I wanted to live. I wanted to grow up."

Sendak didn't go to college and worked a variety of odd jobs until he was hired by the famous toy store FAO Schwarz as a window dresser in 1948. But illustration was his dream to be an illustrator and his break came in 1951 when he was commissioned to do the art for "Wonderful Farm" by Marcel Ayme. By 1957 he was writing his own books. He claimed Emily Dickinson, Mozart and Herman Melville as inspirations.

He worked for decades out of the studio of his shingled 18th century house in Ridgefield, Conn., a country home reachable only by a bumpy road that seem designed to shield him from his adoring public. The interior was a wonderland of carvings and cushions, from Disney characters to the fanged beasts from his books to a statuette of Obama.

Sendak spoke often, endlessly, about death in recent years - dreading it, longing for it. He didn't mind being old because the young were under so much pressure. But he missed his late siblings and his longtime companion, Eugene Glynn, who died in 2009. Work, not people, was his reason to carry on.

"I want to be alone and work until the day my heads hits the drawing table and I'm dead. Kaput," he said last fall. "Everything is over. Everything that I called living is over. I'm very, very much alone. I don't believe in heaven or hell or any of those things. I feel very much like I want to be with my brother and sister again. They're nowhere. I know they're nowhere and they don't exist, but if nowhere means that's where they are, that's where I want to be."


Order a copy of Where the Wild Things Are from The Skanner aStore: Books, Movies and Music