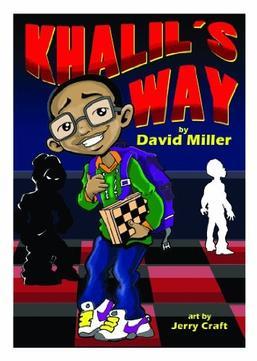 "Do you have nightmares about going to school? Do you hate going to school because you know you'll be teased, or shoved or even beaten up? If yes, you are not alone…

Khalil's Way was inspired by the thousands of children whom I've met who shared traumatic stories about being bullied… Youth deserve to live in a society where they feel safe, secure, accepted and valued.

This means that adults must create schools, playgrounds and other spaces where children are free of teasing, name-calling, harassment, threats and all forms of violence and intimidation."

America is presently plagued by a bullying epidemic which has resulted in literally millions of kids skipping classes, changing schools and even dropping out entirely. Regardless of what has triggered the escalation of the phenomenon, parents, educators and legislators are only belatedly catching on to the need to intervene and to the fact that the perpetrators have to be held accountable for their behavior.

When I was a kid, I think being bullied was tolerated as a mere rite of passage that prepared you for the real world. If you didn't develop a thick skin and learn to play the dozens early on, you could basically expect to be teased for your entire childhood.

In retrospect, I suppose I was bullied during my formative years, although my experience was probably typical for the Fifties. I attended a parochial elementary school located just a block away from a tough public school which made me and my relatively-wimpy classmates easy targets because we had to wear uniforms everyday.

My particular tormentor from nearby PS 36 routinely called me a "faggot" (I'm not gay and didn't even know what the term meant) and took my lunch money at every opportunity, even after a visit to his home by my dad and parish priest. That cease-and-desist request probably didn't work because the boy was being raised in the absence of a father figure by an ineffective single-mom. So, I simply had to man-up and fend for myself, and I still sport a scar from the fight to prove it.

Unfortunately, the 21st Century has ushered in an era when every aspect of bullying has intensified. After all, reprobates with evil intentions now have Youtube, social networks and deadly weapons at their disposal. Consequently, victims often feel hopeless and suicidal due to the overwhelming nature of their predicament, which means bullying has to be taken much more seriously by those in positions of authority.

Besides seeing the excellent documentary "Bully" which is currently in theaters, concerned parents might like to share a copy of 'Khalil's Way' with their kids. On the pages of this entertaining and informative novel, author David Miller chronicles the ordeal of an 11 year-old African-American adolescent who's being teased by a couple of creeps about everything from wearing glasses to being uncoordinated.

The timely tome illustrates the modern hazards associated with having to negotiate a gauntlet of ongoing insensitivity. Yet it also offers a ray of hope via the ultimate triumph of an intrepid young survivor who summons up the gumption to enlist the support of adults as he confronts his abusers in a very constructive fashion.

Bullying revisited not as an apology that "boys will be boys" but as an antisocial pathology deserving of zero tolerance.